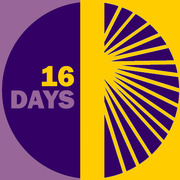 From 25 November, the International Day for the Elimination of Violence against Women, to 10 December, Human Rights Day, the 16 Days of Activism against Gender-Based Violence Campaign is a time to galvanize action to end violence against women and girls around the world. The international campaign originated from the first Women's Global Leadership Institute coordinated by the Center for Women's Global Leadership in 1991.

This year, the UNiTE Campaign will mark the 16 Days of Activism against Gender-Based Violence under the overarching theme, “Leave No One Behind: End Violence against Women and Girls”— reflecting the core principle of the transformative 2030 Agenda for Sustainable Development.

“Leave No One Behind: End Violence against Women and Girls” reinforces the UNiTE Campaign’s commitment to a world free from violence for all women and girls around the world, while reaching the most underserved and marginalized, including refugees, migrants, minorities, indigenous peoples, and populations affected by conflict and natural disasters, amongst others, first.

As in previous years, the colour orange will be a key theme unifying all activities, and buildings and landmarks will be lit and decorated in orange to bring global attention to the issue of violence against women and girls.

Share your photos, messages and videos showing how you orange the world at facebook.com/SayNO.UNiTE and twitter.com/SayNO_UNiTE using #orangetheworld and #16days. For more information about the theme, download the Action Plan. For more information about Orange Day, please contact Natalia Tuerogerman, natalia.tuerogerman@unwomen.org [at]unwomen.org

The United Nations Official Commemoration of the International Day for the Elimination of Violence against Women will take place on 22 November from 10 a.m. – 12 p.m. For more information, see the invitation.