Because We Are Girls 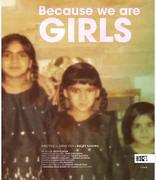 Film will be premiering on May 1 @ 6:15PM, with additional screenings on May 2nd @ 1PM and 3rd @ 6PM.  Early bird tickets are on sale now. Regular admission is on sale March 26th. You may purchase tickets at the Hot Docs Website.

Synopsis:
Three sisters have spent years bracing themselves for the pivotal moment that opens this film: the final verdict in their trial against their cousin, their childhood sexual abuser. From there, the story returns to their memories of growing up in a large and insular Punjabi-Canadian family in the small mill town of Williams Lake, British Columbia. With unflinching candour, the sisters discuss their family's dark secrets and expose a toxic family culture that relied on female subservience and obedience. These roles, they acknowledge, have deeper roots and have in part been reinforced by the Bollywood films that have structured their fantasies of romantic relationships. While the film tells a difficult and confrontational story of abuse, it is also a celebration of the loving sisterhood that allows these women to demand justice for the wrongs of their childhood years. Aisha Jamal

Produced by The National Film Board of Canada

The May 3 screening is the 18th Annual DOXA Documentary Film Festival Opening Gala screening.
The May 7 screening is part of the Justice Forum Series and will include a post-film discussion.

A conservative Indo-Canadian family in Williams Lake, British Columbia must come to terms with a devastating secret: three sisters were sexually abused by an older relative beginning in their childhood years. After remaining silent for nearly two and a half decades, the sisters decide to come forward — not only to protect other young relatives, but also to set an example for their own daughters.

Vancouver-based Filmmaker Baljit Sangra explores the impact of sexual abuse on a family, turning her empathetic lens on intimate moments as they process and heal. Full of nuance and layers, Because We Are Girls weaves poetically between past and present. We witness the emotional toll experienced by sisters Jeeti, Kira, and Salakshana, not only from pursuing justice through the courts, but also through confronting their parents for not protecting them as children. We also share in their happiness as the sisters bond with their daughters and dance along to their favourite Bollywood songs. The film intertwines touching home footage of the sisters as young girls with uplifting scenes of the strong, empowered women they have become.

We are very proud to open our 18th annual festival with this courageous film that celebrates the strength of sisterhood in the face of profound pain and trauma. In one poignant scene the sisters reflect on the cost of breaking the cycle of abuse. What’s ultimately revealed in Sangra’s powerful tribute is that the cost of remaining silent would be far greater. -SC