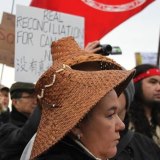 Please wear Pink! Bring Drums if you can. Much respects

"The mother of a 17-year-old Halifax girl who committed suicide says her daughter was raped by four boys about 18 months ago and viciously bullied after a photo of the alleged incident was passed around her school and community.

Rehtaeh Parsons tried to kill herself Thursday night and was taken off life support Sunday.

In an extensive post on a Facebook memorial page, her mother Leah Parsons described how the straight-A high school student became depressed and suicidal after the incident.

“The person Rehtaeh once was all changed one dreaded night in November 2011. She went with a friend to another’s home. In that home she was raped by four young boys . . . one of those boys took a photo of her being raped and decided it would be fun to distribute the photo to everyone in Rehtaeh’s school and community where it quickly went viral,” Leah Parsons wrote. “Because the boys already had a ‘slut’ story, the victim of the rape Rehtaeh was considered a slut.

“This day changed the lives of our family forever.”

Rehtaeh, who was a 15-year-old high school student in Cole Harbour at the time, was repeatedly bullied at school and “suddenly shunned by almost everyone she knew.”

“She was never left alone. She had to leave the community. Her friends turned against her. People harassed her. Boys she didn’t know started texting her and Facebooking her asking her to have sex with them. It just never stopped,” her mother told CBC."