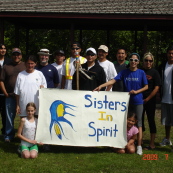 The Daleen Bosse (Muskego) Missing Sisters Awareness Memorial Run will be from Martensville to Onion Lake, Saskatchewan, July 12 to July 15, 2011.

This run is dedicated to the memory of Daleen Muskego. Daleen went missing in May 2004, her remains were found on August 2008. Her family has been raising awareness on the issue of missing and murdered Native women since 2004.

"This is an issue that has been overlooked and this can't happen anymore. More Native women go missing every year and more Native women are being murdered every year. This run in honor of my sister is to raise awareness, it is to let the people know that we will not just sit around and let this happen. The more people that get involved the more powerful our voices become."

Dana, Daleen's brother, is quoted above.