December 6: Take Action on Violence Against Women - Waterloo ON 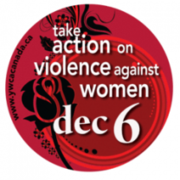 The December 6 Coalition of Waterloo Region would like to announce its annual vigil recognizing Canada's National Day of Remembrance and Action on Violence Against Women.

Each December 6, we commemorate the lives of the 14 women who were singled our for their gender and murdered in the 1989 Ecole Polytechnique Massacre. On this day, we not only honour the women whose lives were taken, but all women and girls who are killed each year due to gender-based violence. This is a time for Canadians to reflect on the history and prevalence of violence against women in our homes, backyards and communities, and to remember those for whom violence is a daily reality.

Most importantly, this is a day for communities to consider the concrete actions they can take to eliminate all forms of violence against women. What can we do to elicit change? What are the consequences if we don't act?

RSVP for December 6: Take Action on Violence Against Women - Waterloo ON to add comments!