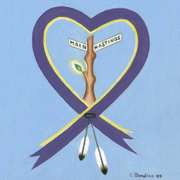 CALL OUT FOR ALL PEOPLE to join us, HONOUR our WOMEN dtes.....Mourning Protocol, all DRUMS invited...

The first women’s memorial march was held in 1991 in response to the murder of a Coast Salish woman on Powell Street in Vancouver. Her name is not spoken today out of respect for the wishes of her family. Out of this sense of hopelessness and anger came an annual march on Valentine’s Day to express compassion, community, and caring for all women in Vancouver’s Downtown Eastside, Unceded Coast Salish Territories. Twenty one years later, the women’s memorial march continues to honour the lives of missing and murdered women.

On Tuesday Feb 14th 2012, we will gather at noon at the Carnegie Community Centre Theatre, 401 Main Street (corner Hastings, Vancouver) where family members speak in remembrance. Given space constraints, we ask the broader public to join us at 1 pm, when the march takes to the streets and proceeds through the Downtown Eastside, with stops to commemorate where women were last seen or found; speeches by community activists at the police station; a healing circle at Oppenheimer Park around 3 pm; and finally a community feast at the Japanese Language Hall. Thank you to Buffalo Spirit for the big drum.

Increasing deaths of many vulnerable women from the DTES still leaves family, friends, loved ones, and community members with an overwhelming sense of grief and loss. Over 3000 women are known to have gone missing or been murdered in Canada since the 1970s, and annual women's memorial marches now occur in dozens of communities across these lands.

This year, the Feb 14th Women's Memorial March occurs in the context of the Sham provincial missing women's inquiry headed by Wally Oppall, which we are boycotting because we have been shut out from it and it has continued to marginalize the voices and experiences of women from the DTES. Women continue to go missing or be murdered with no action from any level of government to address these tragedies or the systemic nature of gendered violence, poverty, racism, or colonialism. The Feb 14th Women's Memorial March Committee and DTES Women's Centre have recently made submissions under Article 8 of the Optional Protocol of the UN Committee on the Elimination of Discrimination Against Women, and are now seeking justice internationally.

This event is organized and led by women in the DTES because women - especially Indigenous women - face physical, mental, emotional, and spiritual violence on a daily basis. ...