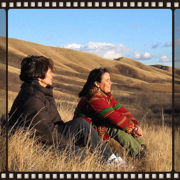 Synopsis: Acclaimed Métis filmmaker Christine Welsh presents a compelling documentary that puts a human face on a national tragedy: the murders and disappearances of an estimated 500 Aboriginal women in Canada over the past 30 years. This is a journey into the dark heart of Native women's experience in Canada. From Vancouver's Skid Row to the Highway of Tears in northern British Columbia, to Saskatoon, this film honours those who have passed and uncovers reasons for hope. Finding Dawn illustrates the deep historical, social and economic factors that contribute to the epidemic of violence against Native women in this country.

Followed by Q and A with Bridget Perrier
Bridget has represented and spoken as a First Nations Survivor Leader three times at Commission of the Status of Women for the UN in New York City. Bridget was pivotal in lobbying and testifying for the passing of Bill C-36, she also helped advocate for Bill C-268 and has also been a active in lobbying for a National Inquiry for MMIW.