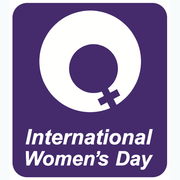 Every year women and men celebrate the achievements of women and protest the on-going inequalities and increase in male violence against women.

1908
Great unrest and critical debate was occurring amongst women. Women's oppression and inequality was spurring women to become more vocal and active in campaigning for change. Then in 1908, 15,000 women marched through New York City demanding shorter hours, better pay and voting rights.

1909
In accordance with a declaration by the Socialist Party of America, the first National Woman's Day (NWD) was observed across the United States on 28 February. Women continued to celebrate NWD on the last Sunday of February until 1913.

1910
In 1910 a second International Conference of Working Women was held in Copenhagen. A woman named Clara Zetkin (Leader of the 'Women's Office' for the Social Democratic Party in Germany) tabled the idea of an International Women's Day. She proposed that every year in every country there should be a celebration on the same day - a Women's Day - to press for their demands. The conference of over 100 women from 17 countries, representing unions, socialist parties, working women's clubs - and including the first three women elected to the Finnish parliament - greeted Zetkin's suggestion with unanimous approval and thus International Women's Day was the result.

1911
Following the decision agreed at Copenhagen in 1911, International Women's Day was honoured the first time in Austria, Denmark, Germany and Switzerland on 19 March. More than one million women and men attended IWD rallies campaigning for women's rights to work, vote, be trained, to hold public office and end discrimination. However less than a week later on 25 March, the tragic 'Triangle Fire' in New York City took the lives of more than 140 working women, most of them Italian and Jewish immigrants. This disastrous event drew significant attention to working conditions and labour legislation in the United States that became a focus of subsequent International Women's Day events. 1911 also saw women's Bread and Roses' campaign.

1917
On the last Sunday of February, Russian women began a strike for "bread and peace" in response to the death of over 2 million Russian soldiers in World War 1. Opposed by political leaders, the women continued to strike until four days later the Czar was forced to abdicate and the provisional Government granted women the right to vote. The date the women's strike commenced was Sunday 23 February on the Julian calendar then in use in Russia. This day on the Gregorian calendar in use elsewhere was 8 March. ...