What if concerned citizens across Canada organized Yazidi discussion circles in support of Yazidi women and girls?

On August 3, 2014, the Yazidi community suffered a horrendous attack by ISIS/ISIL. Many of the men and boys were slaughtered outright along with “older” women. Young women and children were enslaved and tortured. In 2016 the UN reported that atrocities, including daily rapes, against thousands of Yazidi women and girls continue.[i] Those who managed to escape wait in overcrowded and ill-equipped refugee camps.

The plight of the Yazidi women was brought to the attention of the Canadian government by Nadia Murad, a survivor of ISIS's torture and rape. Subsequently a motion was introduced and on October 25th, 2016, the Canadian parliament voted to support Yazidi women and children as refugees:

“MPs have unanimously supported a Conservative motion that formally declares ISIS persecution of Yazidis a genocide and pledges to bring refugees fleeing the violence to Canada within four months….”[ii]

Remember Our Sisters Everywhere will be holding a discussion circle in Vancouver and will be sharing our invitation and agenda.

We encourage all who read this to organize a discussion circle in their area to generate ideas and practical initiatives for supporting Yazidi women and children. It is our hope that together we will motivate all levels of government to take responsibility and provide the best care possible for Yazidi refugees as they arrive in Canada.

And please share this campaign with your colleagues, family, friends and activists.

In the next while, we will be creating discussion circle online information and examples, and publishing them in the Forum section of the website.

In the meantime, please consider these questions:

Can you hold a discussion circle?
Are you ready to learn more about the plight of Yazidi women and girls?
Do you want to do something to help?
Is there a local speaker or feminist worker you could invite to a circle?

One of the goals of the discussion circles is to create and send out letters and a press release, from wherever we are in Canada, encouraging all levels of government to step up for Yazidi women and children, and to respond to our suggestions.

For more information and support:
rememberoursisterseverywhere@gmail.com

Background information on the Yazidi 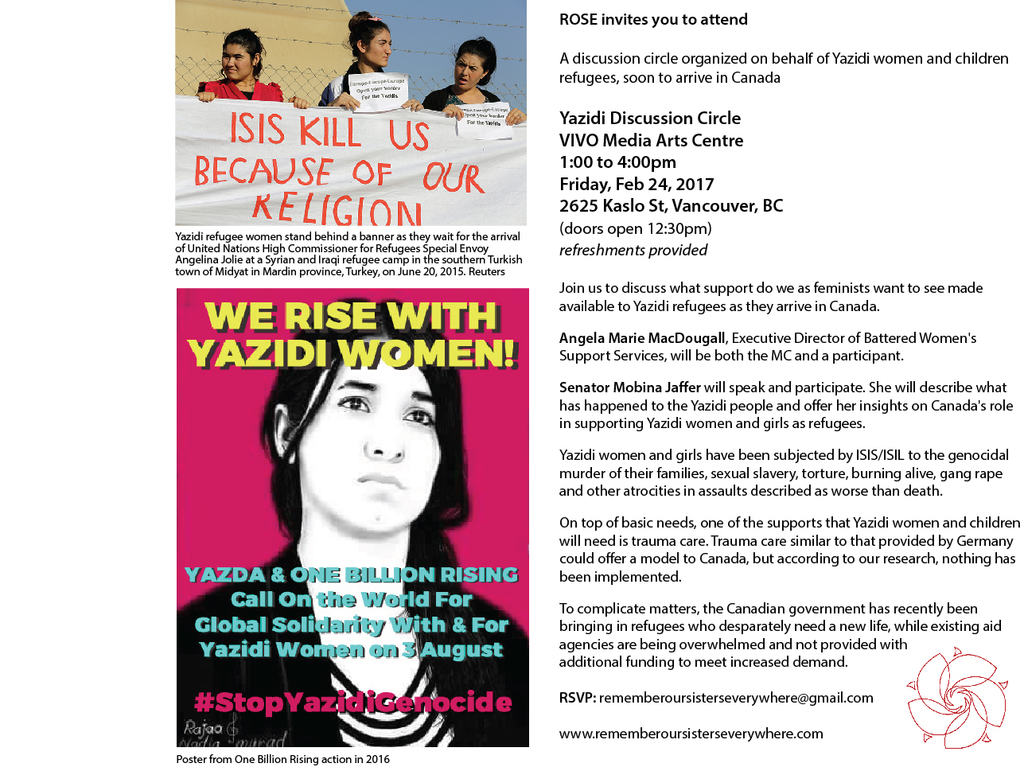