The National Inquiry into Missing and Murdered Indigenous Women and Girls have announced that the Vancouver Community Hearing will take place on April 4 to 8, 2018. Vancouver will be the second community hearing in British Columbia, and could possibly be the last if the Commissioners are not granted their extension request.

The extension request was submitted on March 6, 2018 and asks for an additional two years and $50 million. The Commissioners explained that the extension will allow them to hear from the 630 families and survivors, a number that continues to rise, who have registered to tell their truths but have not yet been heard as well as allow them to hear from vulnerable populations of Indigenous women and girls. The Commissioners further explained that the extension will provide time and resources to complete further research, hear from experts, conduct the regional and institutional hearings, host roundtables, analyze the information collected and provide validated and supported findings and recommendations.

The extension request is the only the latest in the constant flood of news stories on the Inquiry, which has mostly consisted of controversy and criticism since its inception. The timeline of the Inquiry is only one concern that has been voiced over the last year and a half. Other concerns have ranged from the limited scope of the Terms of Reference to high staff turnover rates and problematic communication policies.

Despite these concerns, we must remember that the Commission was tasked with both commemorating and honouring the lives of lost loved ones while simultaneously working to uncover the truth underlying why Indigenous women, girls and LGBTQ2S are disproportionately victimized by all forms of violence. The aim of the Inquiry is to facilitate healing for families and survivors and make recommendations for action and policy reform to affect real change for Indigenous women, girls and LGBTQ2S across Canada. This is not a simple task.

Fundamentally, the Inquiry offers an opportunity for survivors and families members of lost loved ones to share their stories and express their views in hopes that the younger generation will not face the same realities. This work is imperative to ensure that Indigenous women, girls and LGBTQ2S are safe, honoured and empowered.

As counsel for the Heiltsuk Nation in the Inquiry, we have anxiously watched and waited as the Inquiry unfolded since September 2016. The Heiltsuk Nation was granted standing for the regional hearings, which is in Part II of the Inquiry and will not be completed unless the extension is granted. However, the recent announcement of the Vancouver Community Hearing has assured families and survivors that they can share their truths in April in hopes of a better tomorrow for Indigenous women and girls. Although there are many questions left unanswered, we remain hopeful that this process will result in tangible, effective change for Indigenous women, girls and LGBTQ2S across Canada.

The national inquiry into missing and murdered Indigenous women and girls has announced a community hearing in Vancouver from April 4 to 8, as well as two additional days of statement gathering in Prince George.

In a statement released Friday, the inquiry said it will visit Vancouver in the spring. A Prince George statement gathering, set to begin Monday, has been extended from three days to five, Feb. 5 to 9.

Some have expressed disappointment that the event in Prince George, at the start of the Highway of Tears, will not be a full hearing. At a statement gathering, stories are recorded for commissioners to review later.

The national inquiry has held nine community hearings across the country so far, according to a press release. More than 697 families and survivors have shared stories of their lost loved ones and experiences of violence against Indigenous women and girls, including LGBTQ2S people. Another 600 people are registered to participate in the truth gathering process as the inquiry continues to announce dates.

In September, the inquiry held its first B.C. hearing in Smithers. 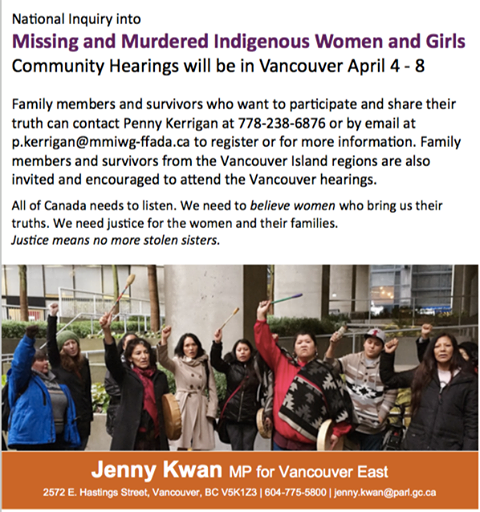