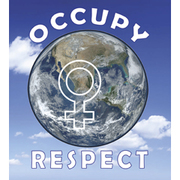 December 6th, 2012
National Day of Remembrance and Action on Violence Against Women
Marker of Change, the Women's Monument in Thornton Park
Main Street and Terminal Avenue
Vancouver, BC

Occupy Respect Ceremony in Thornton Park at 9:00 am
Noon ceremony at the Richmond Women's Resource Centre

The Ceremony protests violence against women and envisions respect as a way to peace. We will begin by acknowledging unceded Coast Salish territory as Squamish Elder Audrey Rivers gives the opening prayer. Posters, statements will provide a glimpse of the massive efforts worldwide to end the violence. The Raging Grannies will sing. Artist Margaret Dragu (aka Lady Justice) and musician Eileen Kage will perform an action as part of the ceremony.

A Meditation for those living and dead who have suffered from violence will then precede a minute of silence.

Closing song by the Raging Grannies.

Posters and pens will be available for participants to write their vision/prayers/commitments concerning respect. With ideas such as: