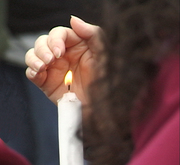 You are invited to *RAISE YOUR VOICE* this December 6th.

The "Not so Silent" December 6th Vigil, a community-wide memorial, will be
held at Parade Square, City Hall, Halifax to remember all women affected by
violence. December 6th is the National Day of Remembrance and Action on
Violence Against Women. It is the anniversary of the Montréal Massacre,
where fourteen women were murdered execution-style at l'École Polytechnique
in Montreal in 1989. These women were murdered because they were assumed to
be taking jobs originally considered to be 'for men'. This year marks the
nineteenth anniversary of this tragic event. The day is observed across the
country with vigils, memorials, and other ceremonies.

The massacre was and continues to be a wake-up call for each of us: violence
against women is a tragic reality. While we hold the memory of the massacre
in silent reflection at vigils we also need to speak out and end the silence
that obscures this global issue. The voices of women will no longer be
silent. We will be raising our voices ~ in a loud and strong call to end violence
against women ~ in song, spoken word, and a moment of screaming.

*We will gather at 4:30pm in Parade Square on Saturday, December 6th.*
Those who would also like to attend the annual memorial at Dalhousie's
Sexton campus are invited to join a vigil walk to the campus following the
event.

RSVP for Raise Your Voice to add comments!