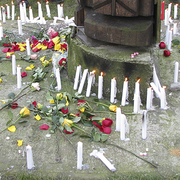 A new exhibition to remember the missing women of Vancouver at Trinity Square Video.

Sixty-five of Canada’s most disenfranchised women disappeared from the streets of Vancouver’s notorious Downtown Eastside between 1978 and 2001. Families and friends pushed the Vancouver Police to investigate, but the search went slowly, until it was finally discovered that many of the missing women had been murdered. Canada’s largest serial killing and crime-scene investigation drove the name of the killer to international fame. Lost in the shadow of his name are the names of his many victims. Using documentary artifacts that shift the focus to see each missing woman, Cole’s commemorative installation propels the “missing women” to women who are missed.

Janis Cole is an award-winning filmmaker, writer and artist with more than thirty years experience. Her feature documentary films include P4W: Prison for Women, which earned a Genie Award and Hookers on Davie, which won a Gold Plaque in Chicago. Other awards include the NFB’s Best Canadian Short Film Award at the Toronto International Film Festival and a Toronto Arts Award in Media Art. Her television writing has earned six Gemini nominations and a Writer’s Guild Top Ten Award. She writes for several Toronto publications, teaches at the Ontario College of Art & Design and is completing her Master of Fine Art in Documentary Media at Ryerson University. She has lived in Chatham Ontario, Vancouver and Toronto, and now makes her home in the Haliburton Highlands.