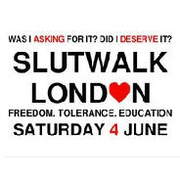 Slutwalk London: The radical notion that nobody deserves to be raped.

On 24th January 2011, a Toronto policeman told a group of law students that in order to avoid being raped 'women should avoid dressing like sluts'.

This sparked outrage around the globe, with people from Chicago to Amsterdam standing up and saying that we have had ENOUGH of being victimised and labelled, with women speaking out for freedom, equality and fun.
...
Not only was this a ridiculous and inaccurate statement (women wearing trousers get raped. So do women wearing tracksuits, t-shirts, jeans, jumpers, skiing jackets and burqas. So do men), it was incredibly damaging to sexual assault survivors around the world, painting them as perpetrators - rather than victims - of a disgusting, violent crime. In addition, it completely erased the experiences of the millions of brave, strong people who have survived rape and sexual assault - painting them as human beings unworthy of respect.

Sadly, this is not a single, isolated incident. All over the world, women are constantly made to feel like victims, told they should not look a certain way, should not go out at night, should not go into certain areas, should not get drunk, should not wear high heels or make up, should not be alone with someone they don't know. Not only does this divert attention away from the real cause of the crime - the perpetrator - but it creates a culture where rape is OK, where it's allowed to happen... after all, she must have been asking for it, right?

Let's end a culture of fear and victimisation. No means No - but rather than saying no, let's say YES. Yes to wearing what you want, going where you want with who you want and being able to express your personal sexuality in whichever way you please. Yes to having a great time without being scared that every man you meet is going to assault you. Yes to love, fun and respect.

So let's turn up, give the world a message and have some fun! Meet at Trafalgar Square on Saturday 4th June at 1pm. Everyone is welcome - all genders, races, ages and sexualities. Bring friends and family, banners, food and instruments, and come along feeling beautiful, ready to show the world that WE ARE PROUD!

PLEASE NOTE: This will be a 100% PEACEFUL protest. While so-called 'violent' and 'non-violent' tactics both have their relative pros and cons, SlutWalk London aims to be open to everyone - families, young children, older people, differently abled people, and others who may not feel comfortable with certain tactics. Please respect this :)