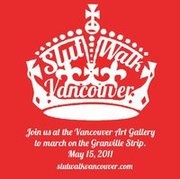 SlutWalk Vancouver is happening on May 15th in downtown Vancouver!
Visit our Facebook event page to RSVP
SlutWalk Vancouver is coordinated by a group of committed organizers, and working groups.
Inspired by, and acting in solidarity with SlutWalk Toronto, SWV shares their vision (adapted from SWToronto: