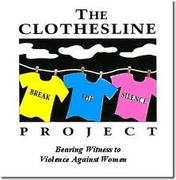 Please come out and join the Women's Events Network in Ottawa in support of The Clothesline Project.

SILENT NO MORE!
WE'RE HANGING OUT OUR DIRTY LAUNDRY AT THE CLOTHESLINE PROJECT!

WHO: The Women's Events Network invites women whose lives have been touched by violence to come out, paint a t-shirt, and hang it on our clothesline.

WHERE: The Women's Monument at Minto Park (Elgin and Gilmour)

WHAT: The Clothesline Project brings together local women who are survivors of violence to paint T-shirts as a testament to their experience. These deeply personal expressions are then hung on a clothesline for public display to air the issue of violence against women.

Let's remember the women we've lost because of violence in our own community this year! It touches us all! Already in Ottawa this year, we've lost Michelle Cameron and Tinde Nemet. Family members of each woman have been charged with their murders. A 24-year-old woman, Amanda was found in critical condition after suffering days of abuse. A live-in boyfriend has been charged in this case. A two-year-old was removed from the home when police showed up. Each day, we know that untold numbers of women and children are living in fear! The Clothesline Project is all about situations like these. Let's speak out about violence against women.  It has to stop!