Vancouver Park Board discusses geese issue at Marker of Change

Finding solutions to desecration of the Women’s Monument

Vancouver Park Board Commissioner Stuart Mackinnon is bringing forward a motion next Monday that will call for a long term solution to preserve Marker of Change in Thornton Park for activism against violence against women.

In 2013, a flock of Canada geese that lived north of the train station were displaced into Thornton Park by a new development. Their habitat had been turned into a gravel parking lot. The geese now use rain water in the "pool of tears" on each granite bench for drinking water and defecating. The granite benches have been in a terrible state ever since.

“Marker of Change is a circle of pink granite benches naming the fourteen women assassinated in Montreal on December 6th, 1989. A dedication to women and girls murdered worldwide is inscribed in seven languages,”  said Chris McDowell, member of the Women’s Monument Committee.

Chris continued, “The monument provides both a sombre and welcoming artwork in the park. It is a place of action or reflection, a place that is embraced by activists, educators, and mourners, as well as enjoyed by locals and visitors who enter and exit the nearby train station.”

“These geese have found a source of water and as a result they have all but destroyed the purpose of Marker of Change,” said artist and creator Beth Alber. “The concept of this piece, characterized by a shallow crevice on top of each bench that collects water, a symbol of tears and grief, cannot accommodate the displaced wildlife. I am pleased that the Commissioners are looking into finding permanent solutions to this aesthetically ruinous situation.”

“I do not want the family and friends of the women and girls who have been murdered to see a memorial that is chronically covered in geese excrement,” said Alber. “I am saddened that this has been allowed.”

Hedy Fry, MP Vancouver Centre and long time supporter of Marker of Change agreed, "As Minister for Women's Equality, I supported the building of this monument, to honour the memory of the 14 women killed at L'Ecole Polytechnique‎. We cannot allow its desecration."

The Park Board was actively involved in the national design competition which resulted in Marker of Change being built in Thornton Park. A great deal of care was taken to ensure the monument would be easy to maintain, but what has happened since the arrival of the geese has come as a surprise. The benches are covered in geese feces affecting Marker of Change, and  making the benches a health hazard for anyone who uses them.

“Other municipalities like the City of Toronto take measured steps to reduce and relocate their increasing goose population. We look forward to seeing how the Vancouver Park Board tackles this issue in Thornton Park,” Elinor Warkentin, Women’s Monument Committee. 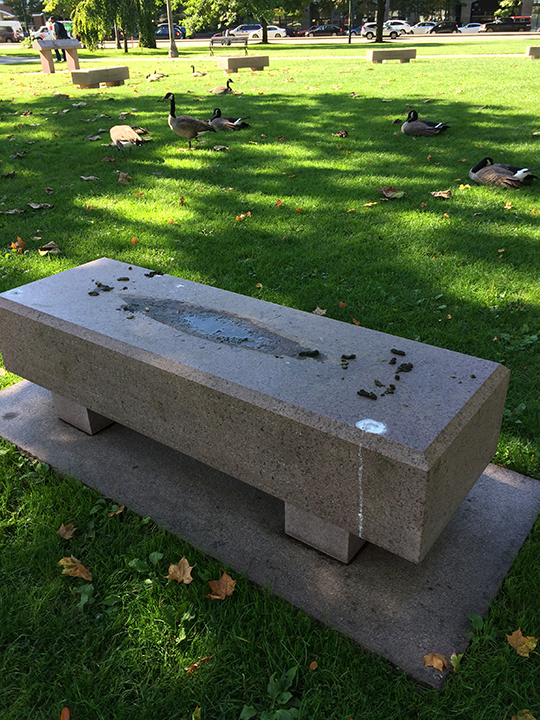