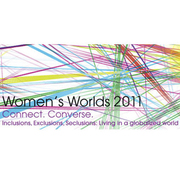 The Women`s World 2011 Conference, will take place in Ottawa-Gatineau on July 3 to 7, 2011. Women`s World is a global feminist initiative:


"The first Women's Worlds congress was held at Haifa University in December of 1981. It was the first world-wide interdisciplinary gathering to focus on research pertaining to women's issues and to be open to all interested researchers and activists. Since then, WW has taken place every three years in a different part of the world. Ottawa-Gatineau is the location of the 11th Women's Worlds (WW) in 2011 - the 30th anniversary of the congress. Organizing of this congress has happened over four years, with volunteer committees and eventually a small secretariat overseeing the planning and implementation of the event." The co-hosts of Women’s World are the presidents of the University of Ottawa and Carleton University. Its co-chairs are Caroline Andrew, Director of the Centre of Governance and Professor in the School of Political Studies, University of Ottawa, and Rianne Mahon, CIGI Chair at the Balsillie School of International Affairs, Wilfred Laurier University.

The main theme of the Women’s World 2011 is described as follows:
INCLUSIONS, EXCLUSIONS, AND SECLUSIONS: LIVING IN A GLOBALIZED WORLD…

For more information on this conference, including its official program, registration information etc., go to: http://www.womensworlds.ca/

Even if you can't be here, join us.

From thematic programming to countless Arts & Culture events, we've got you covered.

We will be working overtime to bring you the most up-to-the-minute congress highlights. Stay connected to our website homepage for all sorts of multimedia content -- video recordings of the plenary sessions, still and moving pictures of sights and sounds, podcasts, plus user-generated content from congress participants themselves.

(For folks that can't afford the registration fee, if you do 12 hours of volunteer work before, during or after the conference, they will waive the fee. This is primarily of benefit to women in Ottawa but it could help make the conference more accessible for others as well.

When you go to the conference website, there's an "Event" button at the top of the page - click there to see the section on volunteering.)