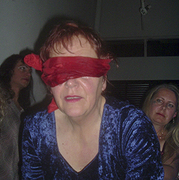 LADY JUSTICE is formerly called Justita, and earlier Themis, Dike & Ma'at, she is seen in paintings, sculptures, friezes around the world, & as chachkas on E-Bay. It is the act of BEARING WITNESS that is central to the work of Lady Justice.

“Mature but not old; Lady Justice aka Lady J and sometimes just La Dragu is without question the world's most ubiquitous artist model! Formerly called Justita, and earlier Themis, Dike & Ma'at, she is seen in paintings, sculptures, friezes around the world, & as chachkas on E-Bay.”

Lady Justice seeks and represents justice while exploring issues of sex and representation, sexuality in time of war, transgressed/transgendered body, public/private obsession with celebrity, symbols/symbolism, fata morgana/simulacrum, & notions of vengeance/bearing witness.
It is the act of BEARING WITNESS that is central to the work of Lady Justice.

My alter ego surfaced like a phoenix from the flame during a 2006 performance
in St. Catharines, Ontario. I spent 3 weeks on-line soliciting participants to go to bed with me (and my cameraman) to talk about sex/intimacy and as a re-enactment of 1969 Lennon/Ono Bed-In and Give Peace a Chance recording in Montreal. My projection performance culminated in a ritual-exhaustion dance whereby Lady Justice’s blindfold fell to reveal a weeping goddess.

A spontaneous candlelit vigil-parade surged through the streets of St. Catharines lead by the weeping Lady Justice holding her Scales and Sword. Lady Justice has channelled Mary Magdalene during a Montreal performance about AIDS, guilt, and fear; employed salt & wine rituals at many public mourning sites including Edmonton’s statue honouring the slain women of the Montreal Massacre at L’ecole Polytechnique; and performed a 3-hour weeping durational performance about revenge/tolerance during Hive 2 Festival in Vancouver. Lady Justice maintains a strong web presence through Lady Justice Blog, reviewing RSS feeds, & collecting photos of justice/injustice (including traffic accidents, hit and runs) from artists through mail/correspondence art.

You need to be a member of Lady Justice to add comments!