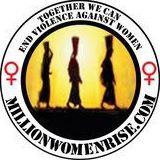 THE REALITY IN THE UK TODAY:

One woman in four will experience domestic violence at some point in her life.
Domestic violence has more repeat victims than any other crime (on average there will have been 35 assaults before a victim calls the police).
Two women are murdered every week by their partner or ex partner.
One incident of domestic violence is reported to the police every minute.
One woman in four will experience sexual assault as an adult.
Only 5% of rapes reported to the police result in the perpetrator being convicted in court.
Women are more worried about rape than any other crime.
250 cases of forced marriage are reported each year.
Up to 1,420 women per year are trafficked into the UK for sexual exploitation
One woman a month is murdered in the name of ‘so called’ honour.
Nearly 90% of local authorities do not have a rape crisis centre.
Over 20,000 girls could be at risk of Female Genital Mutilation (FGM) in the UK.

Sabrina is the founder and co-ordinator of Million Women Rise ( annual march and celebration of international women’s day in central London, with approximately 10,000 women and children attending. The biggest women only march in the UK since the suffragettes and greenham Common. MWR is the first and only unregistered, unfunded coalition of grassroots women in the UK to be led predominantly by Black and ethnic minority women. The annual march from Hyde Park to Trafalgar square brings together the most diverse group of women the feminist movement has seen in solidarity with women across the globe calling for an end to male violence against women.

Sabrina is the vision holder and inspiration behind MWR, she works tirelessly and unpaid all year to co-ordinate the march; including and bringing together many women who have until now been excluded and marginalised within the mainstream feminist movements and discussions.

Million Women Rise is the 21st century face of feminist solidarity and its very existence is challenging and supporting UK feminist activity to become truly inclusive of all women.

You need to be a member of Million Women Rise to add comments!