Speaking for a Long Time 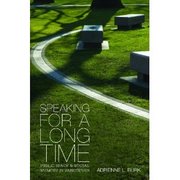 Speaking for a Long Time
Public Space and Social Memory in Vancouver
by Adrienne L. Burk

Speaking for a Long Time

Adrienne L. Burk is a senior lecturer in the Department of Sociology and Anthropology at Simon Fraser University.

In the late 1990s, Vancouver's Downtown Eastside became the setting for three monuments – Crab Park Boulder, Marker of Change, and Standing with Courage, Strength and Pride. The monuments were grassroots initiatives that challenged the norms of civic art by claiming a place in public space for society's most vulnerable groups, and each figured in debates about many kinds of violence. Emphasizing the resilience and agency of artists, activists, and residents, this vivid account of the creation of memory-scapes offers unique insights into the links between power, public space, and social memory. It asks us to reconsider what constitutes public art that will “speak for a long time.”

The tragedy at École Polytechnique that took the lives of our daughter Anne-Marie Edward and her engineering school companions, and the ongoing tragedy of the murder of Aboriginal women, have changed our collective social consciousness about violence against women. Adrienne Burk's beautiful and sensitive account of three commemoration sites in Vancouver dedicated to women murdered by men is a case in point, written with extraordinary insight. Speaking for a Long Time will indeed speak for a long time.
– Suzanne Laplante-Edward

What is the meaning of public monuments? In seeking answers to this innocuous-seeming question, Adrienne Burk has produced a fascinating study of urban space, social memory and community history. Burk is not an academic who remains in the ivory tower; the value of her book is that she is down on the sidewalk: observing, talking, recording, reflecting.
– Daniel Francis, Vancouver historian, author, and editor of Encyclopedia of British Columbia

Sexual warfare, unlike class warfare or monuments to world wars, rarely has a public monument. Speaking for a Long Time elaborates on how social monuments can amplify the voices of murdered women everywhere so that society can no longer stand the overwhelming sounds of grief and rage and is forced to change. This book is a powerful clarification of the crucial role of social art for women in public spaces.
– Ellen Woodsworth, Vancouver City Councillor and cofounder of Breaking the Silence of Violence Against Women in the Downtown Eastside

You need to be a member of Speaking for a Long Time to add comments!