The town of Vardø, known as ‘the witch capital of Norway,’ has built a monument dedicated to the memory of the men and women who were burnt or tortured to death, accused of sorcery.

The site of one of Europe’s most brutal witch hunts has been transformed into a modernist memorial monument, perched above the Arctic Circle on the rugged coast of Norway’s most northeastern tip.

As Europe killed more than 40,000 people accused of sorcery in the 17th and 18th centuries, there were vicious witch trials taking place at the edge of the earth, in Norway’s tiny fishing villages.

Right off the crashing waves of the Barents Sea is the remote town of Vardø, known as the “witch capital of Norway.”

Four hundred years ago, Vardø embarked on a crusade to rid itself of witchcraft. For more than a century—between 1593 and 1692—there were more than 140 witch trials in the small village.

At least 91 people, both men and women, were found guilty of sorcery and burned at the stake or tortured to death.

The number may not be as large as elsewhere in Europe, but in northern Norway’s sparsely populated landscape it touched a disproportionately large chunk of the population.

About a third of these trials were specifically targeting Norway’s indigenous Sami population who arose suspicion by practicing traditional healing rituals.

The proceedings were meticulously recorded, giving modern historians insight into the accusations and reasonings that fueled the witch hunt.

“There was an idea in Europe that in the north people might be more inclined to witchcraft and evilness than other places.”

Testimony from the time revealed that witchcraft was believed to be something one consumed—it came in the form of magically tainted milk, bread, or beer.
...
The geographical remoteness may have had been related to the vengeance with which witches were persecuted in northern Norway.

According to historian Liv Helene Willumsen, speaking with Deutsche Welle, there was an theory “that evilness could be found in the north and that even the entrance to hell was in the north. There was an idea in Europe that in the north people might be more inclined to witchcraft and evilness than other places.”

In 2011, these victims were granted official recognition. The Steilneset Memorial was unveiled by Norway’s queen on the same spot thought to be the execution site of the 91 so-called witches.

It was built as a collaboration between two world famous artists: Swiss architect Peter Zumthor and French-American artist Louise Bourgeois. Zumthor’s “Memory Hall” is starkly simple: a long cross-hatched frame containing a corridor filled with 91 lamps. Each one illuminates a window and a plaque that tells the story of the men and women killed with testimony from their trials.

Next to the hallway is Bourgeois’ piece: a black glass box with a constantly burning chair in the middle. Above it, three mirrors reflect the fire. She gave her contribution a fittingly dramatic title: “The Damned, The Possessed and The Beloved.

You need to be a member of The Steilneset Memorial to add comments! 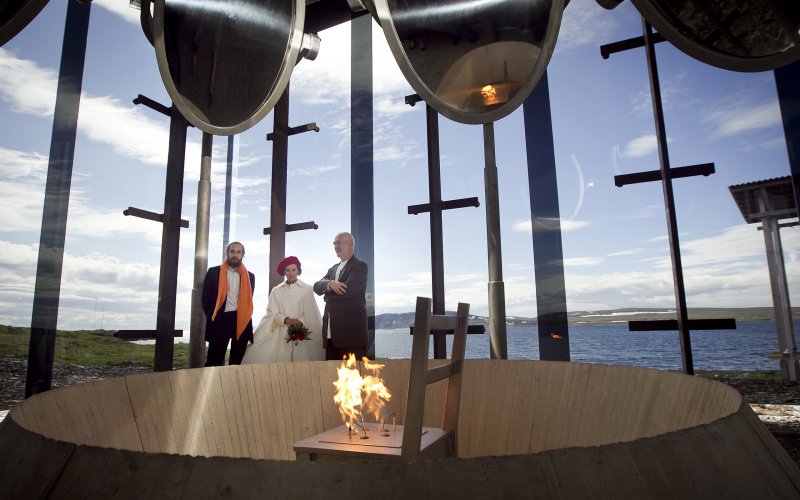