In the course of the 1950s, underground anti-Trujillo movements began to proliferate. Resistance members who were caught were imprisoned, tortured, or brutally killed. Minerva, María Teresa, and Patria Mirabal were among them.

The story of the Mirabal sisters is familiar to all Dominicans. In the days of the dictator Trujillo, there were four sisters, Patria, Dedé, Minerva, and María Teresa. They grew up in a family of privilege, a family favored by the Trujillo regime -- a family which was therefore supposed to be (or at least act) essentially oblivious to the government's rampant corruption and disregard for human rights. Simply put, those who were critical of Trujillo were "disappeared", and there were plenty of people willing to turn in neighbors, employers, or even family members for an offhand remark or joke. People lived in fear of a black Volkswagen of the SIM -- Trujillo's secret police -- driving up to their home.

In the course of the 1950s, underground anti-Trujillo movements began to proliferate. This was dangerous business: resistance members who were caught were imprisoned, tortured, or brutally killed. One by one, Minerva, María Teresa, and Patria Mirabal became involved in the resistance movement. Known as "las Mariposas" ("the butterflies"), the Mirabal sisters quickly became inspirational leaders of the resistance.

The government imprisoned the husbands of the three sisters, hoping that that would silence them. It did not. On the evening of November 25, 1960, as the Mirabal sisters were returning home after visiting their husbands in the Puerto Plata prison, soldiers ambushed their jeep. The three women and their driver were strangled and clubbed to death, and then, in a feeble effort to cover up the murders, their bodies were put back in the jeep and rolled over a cliff.

The public did not believe the government's story of an "accident" claiming the lives of the Mirabals. Historians consider the murder of las Mariposas a turning point in the downfall of Trujillo: popular support of the dictator waned, the resistance movement gained momentum, and the Catholic Church became more openly critical of the regime. On May 30, 1961, Trujillo was himself ambushed and assassinated.

Comment by ROSE on October 6, 2010 at 4:39pm
This monument to the Mirabal sisters is in a small park across the street from the Ojo de Aqua house. Note the three "butterflies" on top. 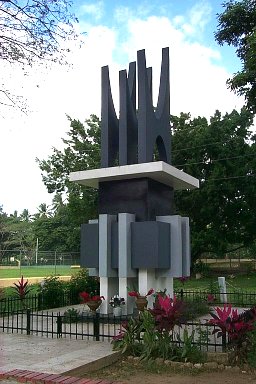 You need to be a member of The Mirabel Sisters, Dominican Republic to add comments!