We are women, men and youth working together to transform our cities into places where women and girls are safe, seen, heard, and can fully participate in all aspects of city life. WTC works to ensure political commitment to addressing and removing barriers that many women face in accessing essential services.

Our Mission:
To transform our cities to work for all women and girls, through community engagement, inclusive policies and equitable representation.

Our Vision:
To live in cities where all women and girls have real social, economic and political power.

What do we do?

We educate, promote awareness and take action on issues such as affordable housing, violence against women, leadership, electoral reform, aboriginal women’s priorities, and the environment.

We examine the impact different public policies will have on women and girls using an equity/intersectional lens that includes sex, race, gender, and income.

We want women and girls to be engaged as decision makers, as elected officials, workers, planners, mothers and informed citizens to transform our cities to be more equitable and democratic for all. We ask: what changes can cities make to improve the lives of women and girls?

We hold monthly Cafés to discuss how our cities can work for women & girls. Our Cafés are held in diverse locations, often in partnership with other organizations. See our Calendar for future Cafés and click here to read past Café reports on topics such as childcare, work, youth, public transit, immigrant women, seniors, and design of cities. 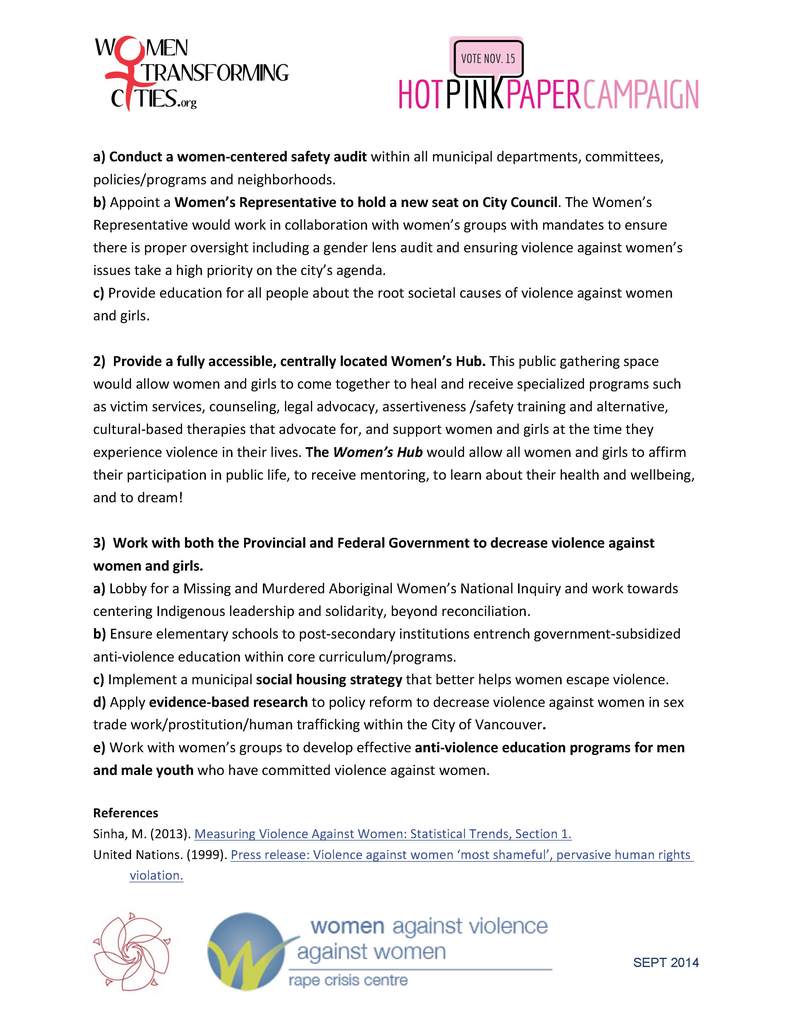 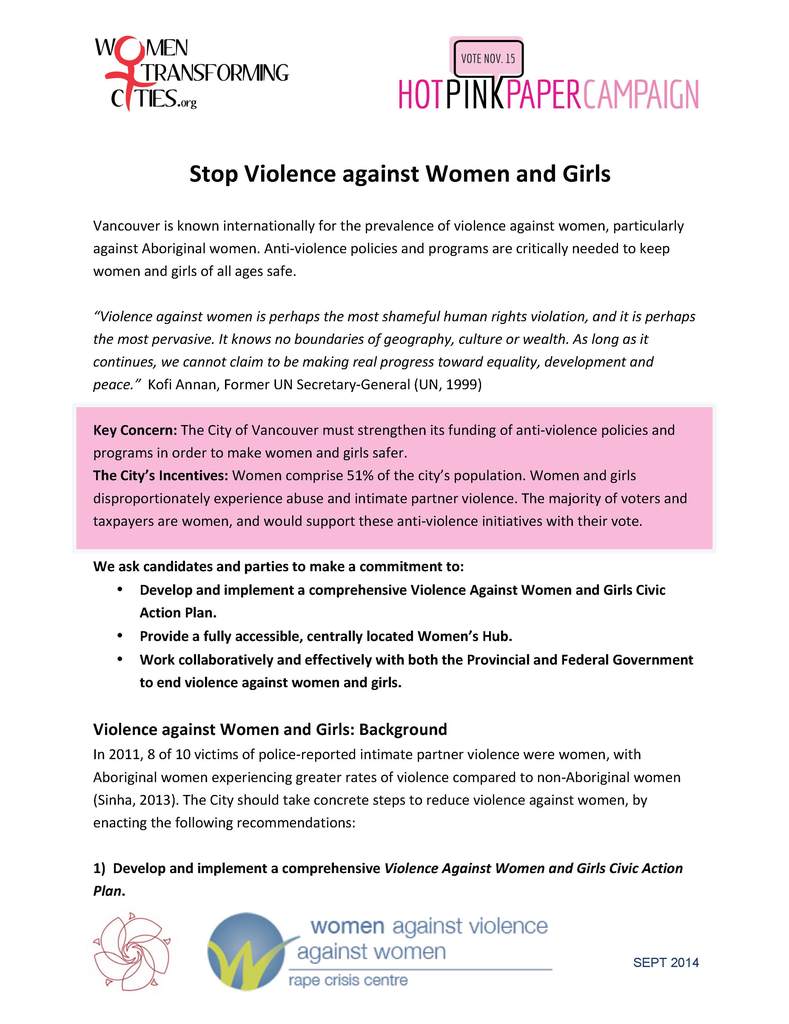 Please click on the Stop Violence against Women and Girls campaign paper below; one of many campaign papers. Visit the Women Transforming Cities website on September 30th for more:
http://womentransformingcities.org/

Can poor city planning aid and abet violence against women? Consider the fatal gang rape in Delhi last December of the young woman referred to in the press as “Nirbhaya” (“fearless”). As an angry public poured into the streets to protest Nirbhaya’s death, other brutal attacks captured international headlines. Just this week, an 11-year old girl in Kolkata succumbed to her injuries after resisting her attacker, while a 7-year old was assaulted then dumped from a train travelling through Chhattisgarh.

As a result of the public outcry over the issue of women’s safety, the Government of India set up a high-level committee to examine possible legal reforms to halt sexual violence. Led by the late Chief Justice JS Verma, the committee called for sweeping changes to Indian law. Among its conclusions: “failure of good governance is the obvious root cause for the current unsafe environment eroding the rule of law.”

Good governance and good city planning go hand in hand. Officials and urban planners could do more to design safe and inclusive cities, not just in India, but in much of the world. Designing cities with the dignity of its poorest and most vulnerable residents in mind is one small reparative step that make right what has gone so wrong in Delhi and in so many other places.

For women and girls, public spaces too often equate with dangerous spaces. Everyday tasks such as fetching water can turn violent: fights break out at water tankers and public standposts, with women coming to blows; harassment and assault of women and girls is also common, with boys making crude comments and brushing up against them as they queue for water. Many public toilets are sanitary and safety minefields. In addition to overflowing wastewater, days with no water or electricity, broken or non-existent toilet stall doors, and high user fees, women are harassed by men and boys lurking around the facilities. Women would often rather defecate in open fields than face the indignity of being spied on in public bathrooms.

These problems may seem insurmountable, but they can be solved. One small, simple step is for local officials and service providers to literally walk in women’s footsteps. Inspired by women’s safety audits pioneered in Toronto, Canada, researchers at the Delhi women’s group Jagori are conducting neighbourhood walkabouts. They look at lighting, the way alleys are built, and the state of public facilities, including communal water sources and public toilets. They encourage city officials to walk with community residents, who point out substandard facilities and the areas in which they feel unsafe.

These safety audits bring to light previously overlooked issues, such as how poor infrastructure and urban design can discriminate against women and create unsafe environments. And they record the subtle, and not so subtle, forms of harassment women and girls face when they attempt to access essential urban services.

Research has shown that educating people to understand and act upon their rights as citizens also helps. For example, funds meant for urban service delivery in resettlement colonies on the outskirts of Delhi were found not to have been allocated as intended. Residents used India’s Right to Information Act to access public records and subsequently demanded the right to water, sanitation, and garbage services from local authorities.

Social change does not happen overnight, but progress can be made in the short term. Practical steps can be taken now to create urban spaces that do not put citizens at undue risk. ... 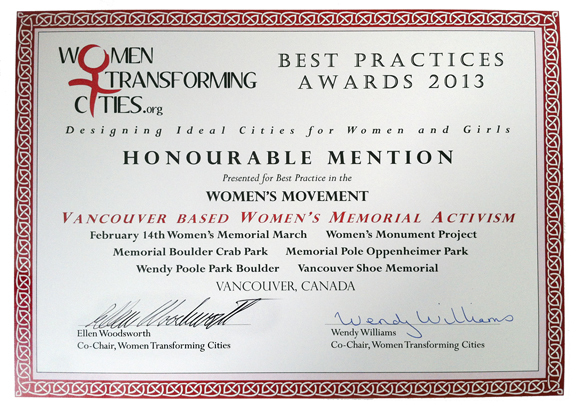 These awards were presented following the first Engaging Women, Transforming Cities Conference on Thursday, May 30. Nominations for a wide range of projects in a number of categories came from around the world; five finalists were selected plus an additional three honourable mentions . http://womentransformingcities.org/best-practice-2013-awards/

From the nomination submission: "Taken together as a grassroots movement, the creation of these and other women’s memorial marches, vigils, public monuments and other innovative projects arise in resistance to the prevalence of violence against women. Having annual and ongoing events and free public sites where communities can gather, protest, and make known their resistance to violence and foster strategies to reduce and end this nightmare threat against all women and girls."

Announcements and information will be posted soon on: http://womentransformingcities.org/

You need to be a member of Women Transforming Cities to add comments!