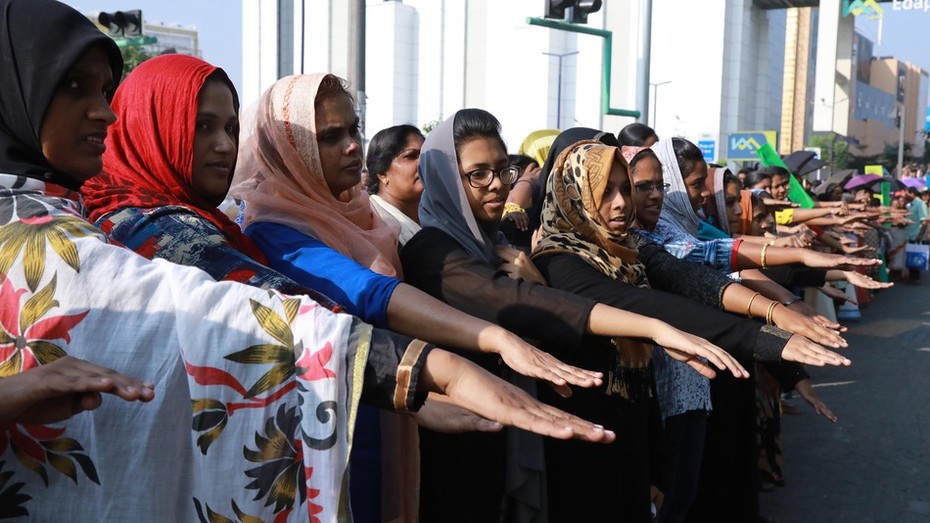 An estimated 5 million women in India joined forces to form a human chain to protest gender inequality and a Hindu temple's centuries-old ban on all women of "menstruating age."

On Jan. 1, 2019, women in Kerala, southern India, joined to form a 385-mile (620km) "women's wall" to protest the persistent barring of women from the Sabarimala temple, which has historically banned women aged between 10 and 50.

After the formation of the protest, two women entered the temple for the first time following the lifting of the ban by the Supreme Court in September 2018. Per the BBC, protesters have since attacked women who've attempted to enter the temple.

According to the Guardian, the two women who entered the temple have been named by local media as Bindu and Kanaka Durga. The pair attempted to access the temple in December but were prevented by "right wing Hindu protesters determined to uphold the ban."

BBC Hindi reports that five million women from all over Kerala lined up along highways to form a chain "which stretched from the northern tip of Kasaragod to the southern end in Thiruvanthapuram." Organisers of the "women's wall" protest — set up by India's left-wing coalition government — had predicted a turnout of three million.

"This is a great way of saying how powerful women are, and how we can empower ourselves and help each other," protestor Kavita Das told BBC Hindi. "Of course, I support the move to allow women of all ages into the temple. I don't think tradition or any kind of backwardness should stop women. Those who want to pray must have the right to pray," Das continued.

Per ABC, the BJP's Kerala state president PS Sreedharan Pillai said the court's verdict was "a conspiracy by the atheist rulers to destroy the Hindu temples".

A spokesperson for the Opposition Congress party, K Sudhakaran, described the two women entering the temple as "treachery" and that the left-wing state government "will have to pay the price for the violation of the custom".