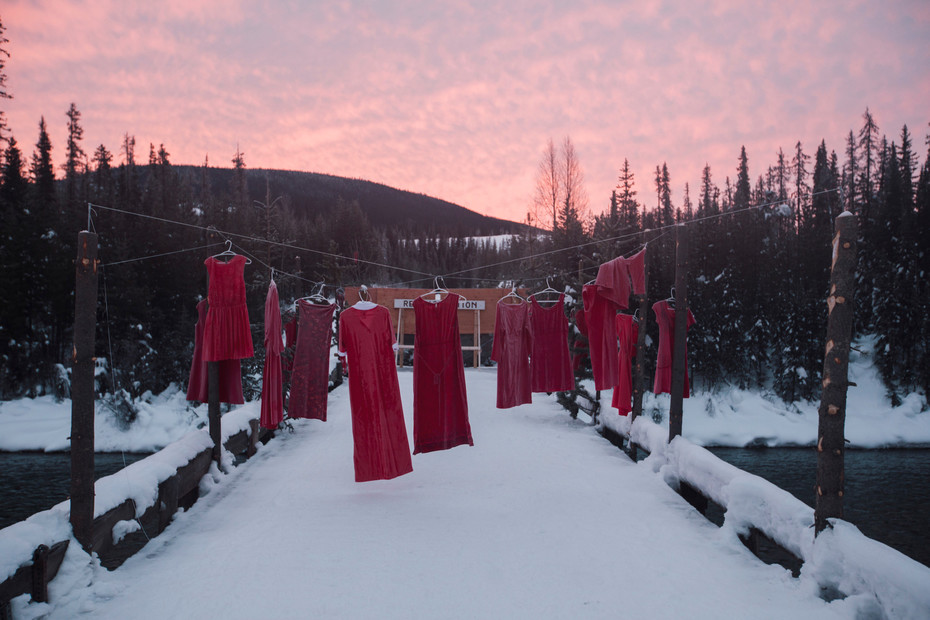 Wet’suwet’en hereditary chiefs are requesting a judicial review of a decision made by the B.C. Environmental Assessment Office to extend the environmental certificate for the 670-kilometre Coastal GasLink pipeline.

The request, filed Feb. 3, argues an extension should not have been granted in light of more than 50 instances of non-compliance with the conditions of Coastal GasLink permits and in light of the findings of Canada’s National Inquiry on Missing and Murdered Indigenous Women.

The inquiry found there is “substantial evidence” that natural resource projects increase violence against Indigenous women and children and two-spirit individuals.

A final report released from the National Inquiry Committee in June found “work camps, or ‘man camps,’ associated with the resource extraction industry are implicated in higher rates of violence against Indigenous women at the camps and in the neighbouring communities.”

“Increased crime levels, including drug- and alcohol-related offences, sexual offences, and domestic and ‘gang’ violence, have been linked to ‘boom town’ and other resource development contexts. … There is an urgent need to consider the safety of Indigenous women consistently in all stages of project planning,” the report states.

Concerns about Missing and Murdered Indigenous Women and Girls are on visible display at the Unist’ot’en camp, located along the intended route of the Coastal GasLink pipeline, where for the past months red dresses — symbols of the epidemic of violence against Indigenous women and girls — hang on signposts or dangle in the air from lines of suspended wire.

Karla Tait, psychologist and director of clinical services at the Unist’ot’en Healing Centre, said the idea came about when the Wet’suwet’en learned of a proposed 400-person worker camp planned for just 13 kilometres from the healing centre.

“We put a call out for red dresses to be sent here, inviting anyone to send red dresses in honour of any missing and murdered Indigenous women in their lives and to help us raise awareness and visibility as Coastal GasLink workers were traveling into our territory and doing pre-construction work,” Tait, who is a Unist’ot’en house member, told The Narwhal.
red dress Wet'suwet'en

The RCMP are currently enforcing a court injunction against members of the Wet’suwet’en and supporters occupying cultural camps in areas of Wet’suwet’en traditional territory that prevent work along the Coastal GasLink pipeline route. Wet’suwet’en hereditary chiefs, representing all five clans of the Wet’suwet’en nation, argue the pipeline was permitted without their consent as legal custodians of the nation’s territory under Wet’suwet’en law and as recognized by Canada’s Supreme Court in a 1997 ruling known as the Delgamuukw decision.

Chiefs issued an eviction notice to Coastal GasLink workers in early January and after weeks of tense waiting, RCMP began arresting individuals within a designated exclusion zone, which extends from an RCMP checkpoint to beyond the Unist’ot’en camp, on Feb. 6.
Huson Tait Unist'ot'en

Freda Huson, left, her sister Brenda Michell, centre, and her niece Karla Tait, right, head inside after offering songs and prayer outside the Unist’ot’en Healing Centre on Thursday. ...

... RCMP officers arrived at the Unist’ot’en camp, located at the 66-kilometre mark along the Morice River Forest Road, on Saturday morning following two days of arrests while dismantling Wet’suwet’en camps along the pipeline route.

Wet’suwet’en at the camp have refused to comply with an RCMP request to surrender.

Unist’ot’en camp founder and spokesperson, Tsake’ze Howilhkat, who also goes by Freda Huson, said the camp is located 66 kilometres from the infamous Highway of Tears, notorious for its connection to the disappearance and murder of Indigenous women in B.C., many of whom she knew personally.

“Some of them are family, extended family, cousins and children. The latest one was our cousin’s daughter-in-law, left a one-year-old baby behind,” Huson told The Narwhal.

She recounted the experience of being on a search party for Frances Brown, who went missing while mushroom picking with her partner. The RCMP called off their search after five days. ...

...  “I, with many others, was out there for 35 to 37 days, every day from seven in the morning until seven at night we searched,” Huson said. “We were popping Tylenol because our bodies hurt so bad but we kept going out every day searching and we didn’t find any clues.”

Huson said she is angry the RCMP will deploy enormous resources to enforce an injunction against Indigenous people defending their territory but not to investigate the murder of Indigenous women or locate missing women or their remains.

“Maybe some of them are out here, somewhere,” Huson said of the area surrounding the Unist’ot’en camp. “Because of lot of them went missing and they could have easily went on these back roads. A lot of this territory was hardly used, so they could have been brought out here somewhere.”

There are 14 work camps planned to support the construction of the Coastal GasLink pipeline. Nine are already in operation, with additional camps expected to be built in 2020, according to a spokesperson with TC Energy, formerly TransCanada, which owns the pipeline.
Freda Huson

Dinï ze’ Smogelgem, Hereditary Chief of the Laksamshu (Fireweed and Owl) clan said the Wet’suwet’en’s application for judicial review of Coastal GasLink certificate extension also points out the connection between the project and threats to women.

“My cousins are listed among the murdered and missing women and girls,” he said in a statement announcing the case. “B.C. must not be allowed to bend the rules to facilitate operations that are a threat to the safety of Wet’suwet’en women.”

Caily DiPuma, legal counsel for the Wet’suwet’en with Woodward and Co., said the request for judicial review is about questioning the integrity of the environmental assessment process.

Coastal GasLink has not substantially started construction within the five years of its environmental certificate, granted in 2014, as is mandated in the permit. The company requested the Environmental Assessment Office grant a permit extension.

When considering a permit extension, the office is required to consider new significant and adverse impacts of the project and consider a proponent’s compliance in the five years in which they’ve been operating, DiPuma told The Narwhal.

“The EAO didn’t do either of those things properly,” she said.

“We know there is a correlation between camps of workers, what are called ‘man camps,’ and violence against Indigenous girls and women and queer people,” DiPuma said, adding that the Calls to Action from the National Inquiry direct decision-makers “like the EAO to undertake an assessment of gender-based harms for these kinds of projects.” Similar calls to action are directed at industry.
Man camp 9a Coastal GasLink Wet'suwet'en

A canvas tent near the Coastal GasLink work camp 9A on Jan. 5. Photo: Amber Bracken / The Narwhal

Despite this, the Environmental Assessment Office did not properly conduct an assessment of risks to Indigenous women from the Coastal GasLink project when extending its permits, DiPuma said.

“The EAO said Coastal GasLink would be prepared to consider doing so in the future. So, instead of creating a legally binding requirement for them to consider these harms, they took industry at its word that it would voluntarily do so at some point in the future.” ...

Coastal GasLink has also been found out of compliance with the conditions of its environmental certificate in more than 50 instances, according to the Environmental Assessment Office’s compliance program, including by restricting access to traplines and failing to adequately dispose of camp garbage.

Despite these many instances of non-compliance, the Environmental Assessment Office decided the company’s permit should be extended, DiPuma said.

“They haven’t explained to the public or my client why that should be.”

The $2 million Unist’ot’en healing centre, which has received $400,000 from B.C.’s First Nations Health Authority to run land-based trauma and addictions treatment programs, is designed to provide services to vulnerable individuals, including youth in trauma treatment programs.

Tait said the red dresses hanging around the centre — some of which bear the initials of women people in the camp have lost — will act as a confrontation to the RCMP officers performing arrests.

“It’s a chance for the RCMP to confront those women, in a way, and be held to account on their failure to protect their safety,” Tait said.

But, she added, it’s also an opportunity for these lost and voiceless women to stand in solidarity with their community and family.
Red dress unist'ot'en MMIWG

“We have a line of red dresses across the bridge because we think it’s a very powerful statement and it’s an invitation to the spirits of those women to come and stand and face the RCMP who are failing to seek justice on their behalf, who failed to protect their safety by being complicit in this epidemic that our communities are facing.”

Tait, who faces imminent arrest herself, said she believes women have a particular responsibility to protect Wet’suwet’en territory.

“We are a matrilineal culture, so our women are our strength. The women make the decisions about the land, because we know our children depend on the land, they inherit our territory after we’re gone and that’s all through the mother’s line. So it really feels like it’s a deep responsibility for us as women to make sure there’s territory intact, there’s a safer future for our children that are coming and that these lands will remain here and remain a sanctuary for our people.”

Freda Huson, right, looks at pictures of the early morning arrests at the 39-kilometre camp, with her sister Brenda Michell, left, and niece, Karla Tait, centre, at the Unist’ot’en Healing Centre on Thursday Feb. 6. Photo: Amber Bracken / The Narwhal

The Wet’suwet’en application for a judicial review was served to Kevin Jardine, associate deputy minister of the environment and the executive director of the Environmental Assessment Office, as well as Coastal GasLink.

DiPuma said her office has yet to hear back from the substantive parties.

“They’ve got some time to consider their position on this. It’s up to them to determine if they reconsider the permit or if they want to go to court.”