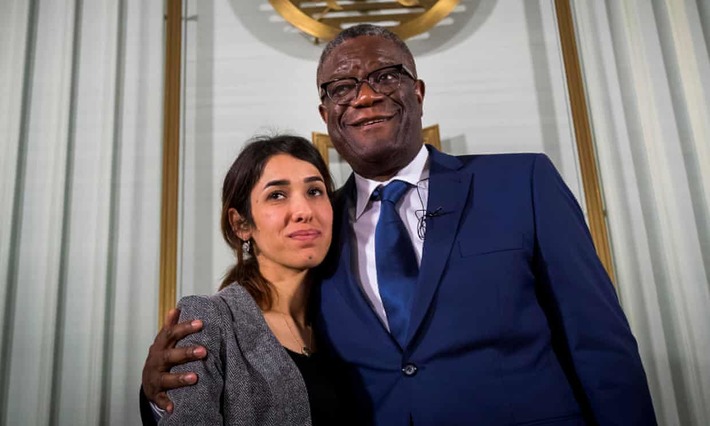 The Global Survivors Fund, established by Nadia Murad and Denis Mukwege, seen here at the Nobel Institute in Oslo, has received a €6m donation from France and €2m from the EU.

Nobel laureates Denis Mukwege and Nadia Murad have launched a fund to provide reparations for survivors of wartime rape.

The Global Survivors Fund will provide tailored support to help people recover from the emotional and physical trauma they have experienced.

This could be in the form of financial compensation, support to access healthcare services or return to education, or assistance with getting somewhere to live.

The fund will also support governments to set up their own reparation schemes. The initiative, officially launched in New York on Wednesday, is expected to attract funding from donor governments and the private sector, with the aim of raising between $50m (£38m) and $100m by 2022.

The French president, Emmanuel Macron, has already committed €6m (£5m) to the fund, while the EU has pledged €2m.

Germany provided about €200,000 “seed” money to help establish the fund, and the UK, Japan, South Korea and Norway are understood to be exploring ways to support it.

Esther Dingemans, director of the Mukwege Foundation, said the aim of the fund was to provide restorative justice for survivors. “What has really been missing is recognition of the harm done to them, which is extremely important, and prevention of stigma,” she said.

Mukwege, a surgeon whose Panzi hospital in the Democratic Republic of the Congo has helped tens of thousands of people who survived sexual violence perpetrated by armed forces, said in advance of the launch: “The importance of establishing this fund for survivors of conflict-related sexual violence cannot be overstated. We have been advocating such an initiative for many years. Seeing it come to fruition is a huge step forwards for humanity.”

Murad, a Yazidi woman who became a human rights campaigner after escaping enslavement by Isis, added: “Reparations are a step toward restoring dignity to survivors who often do not have any means to seek justice for the pain and suffering they have endured. A global fund is an innovative solution to providing survivors with a path towards healing, and it signals that our collective conscience acts in the name of humanity.”

Mukwege and Murad jointly received the Nobel peace prize last year. The creation of the fund was included in a UN security council resolution to combat rape in conflict that was passed in April, after the US successfully lobbied members to remove key language related to women’s sexual and reproductive health and rights.

On Tuesday, the security council passed another resolution, introduced by South Africa. It is the 10th such resolution passed since 2000 that seeks to address women’s specific experiences of conflict, and press for their involvement in peace negotiations and post-conflict reconstruction.

The new resolution called for the full implementation of commitments made by members almost two decades ago.

But it failed to mention sexual and reproductive health and rights, and was criticised by Karen Pierce, the UK ambassador to the UN, for being weak in scope. “We believe that the resolution would have broken new ground if it had included explicit language on women human rights defenders and their protection and their security,” Pierce told the security council.

“The work of women human rights defenders is essential to the functioning of democracy and the maintenance and achievement of peace.”

She also criticised the failure to recognise the central role of civil society in leading efforts for change, and emphasised that full implementation needed to include sexual and reproductive health services.

“I know that not all member states agree with this but from the perspective of the United Kingdom, [sexual and reproductive health and rights] and their services are a vital part of public services for women in all countries, and a vital part of ensuring that women can play a truly equal role in the building of their countries,” she said.

The UK had voted for the April resolution, despite the exclusion of sexual and reproductive health and rights.

The executive director of UN Women, Phumzile Mlambo-Ngcuka, told the security council: “The loud and common message is: progress is too slow, political will is not strong enough, and pushback against the needs and interests of women is threatening the progress we have made and pushing further away those who need the resolve and support most.”

Last week, more than 400 civil society groups across 94 countries signed an open letter calling on UN member states to recommit to promises made in 2000.

“As non-governmental organisations dedicated to gender equality and women’s rights, we firmly believe that the feminist principle of women’s agency remains at the heart of the WPS agenda and that we cannot achieve sustainable peace without women’s full, equal and meaningful participation in all levels of decision-making,” read the letter.

“However, nearly 20 years since the adoption of resolution 1325 [passed in 2000], despite the fact that conflicts disproportionately impact the health, safety, and the human rights of women and girls, they remain shut out of decision-making processes that determine their future.”