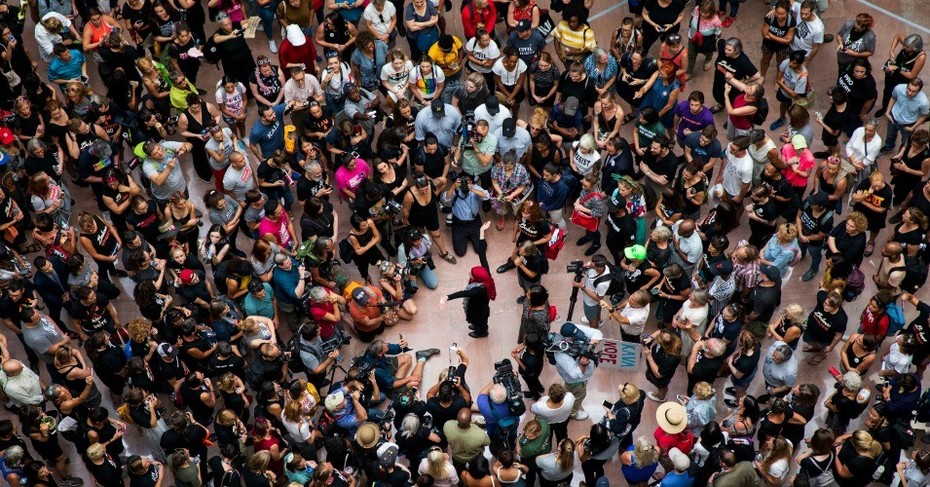 More than 1,000 women and men lined the hallways and filled the atrium of the Hart Senate Office Building in Washington, D.C. on Thursday, demanding that senators vote against Brett Kavanaugh's Supreme Court nomination. (Photo: Drew Angerer/Getty)

As the Senate moved one step closer to voting to confirm Brett Kavanaugh to the U.S. Supreme Court, thousands of men and women took over the atrium of the Hart Senate Office Building on Capitol Hill on Thursday afternoon, voicing solidarity with sexual assault survivors and demanding that lawmakers reject President Donald Trump's nominee.

After rallying at Supreme Court earlier in the day, protesters who'd traveled from all over the country filled the building with chants of, "Whose Senate? Our Senate!" and "Believe Survivors!" as more than one hundred were arrested after staging mass civil disobedience.

Journalists at the scene reported that the demonstration was even larger than the protests which were credited with forcing senators to vote against the Republican effort to repeal the Affordable Care Act (ACA) in the summer of 2017.

At about 4:00pm, Capitol Police began arresting many of the demonstrators.

The protests followed vigils at Senate offices across the country on Wednesday night and came as Republican leaders announced plans to hold a procedural vote on Kavanaugh on Friday, bringing senators one step closer to a final vote on President Donald Trump's historically unpopular nominee—and bringing the national outrage over Kavanaugh to a fever pitch.

As Americans traveled from all over the country to join the protests, Sen. Heidi Heitkamp (D-N.D.) announced she would vote against the judge, following the conclusion of the FBI's extremely limited investigation into the sexual assault allegations.

Sens. Susan Collins (R-Maine), Lisa Murkowski (R-Alaska), Jeff Flake (R-Ariz.), and Joe Manchin (D-W.V.) had not committed to voting for or against Kavanaugh as of Thursday afternoon. Many of the protesters traveled from their states to appeal to the lawmakers directly.

The demonstrators also displayed banners in the atrium, reading "We believe Christine Blasey Ford" and "November Is Coming."