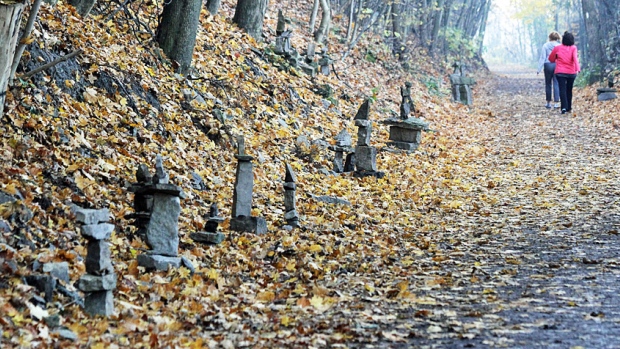 Kristen Villebrun and a team of about 10 people have been constructing inukshuks on the Chedoke Rail Trail for weeks as a way to foster conversation about Canada's missing and murdered aboriginal women.
They've been appearing for weeks on Hamilton's Chedoke Rail Trail.

If you look while out walking, you'll see them – little Stone inukshuks constructed every few feet. They're meant to represent the lives of missing and murdered aboriginal women – 1,181 of them, to be exact.
"And that's a conservative estimate," said Kristen Villebrun, who has been building them with a team of about ten people for six hours a day, four days a week since October.

Villebrun is a veteran of protests for aboriginal rights and activism. But this project is different, she says. It's fostering conversation and serving to educate in a way that she has never seen. It's part art project, part message.

"I thought it was a great idea to do an art installation like this instead of blocking a road," she said. "And the response from people has been amazing."

'We'll continue to do what we're doing until we get our inquiry.' - Kristen Villebrun, organizer

Hundreds of people have stopped to ask the group what it is they're building, and why. That's all the opportunity Villebrun needs to talk to them about how aboriginal people continue to be overrepresented among Canada's missing and murdered women.
According to a June report from the RCMP that was meant to update Canadians on the service's efforts to address unresolved cases, as of April, 174 aboriginal women across all police jurisdictions remain missing – 111 of these under suspicious circumstances.

The Assembly of First Nations has said those findings demand an "urgent call" for action.

"There is a significant and tragic overrepresentation of indigenous women among the missing and murdered in this country," AFN National Chief Perry Bellegarde said in a written statement at that time.
In its election platform, the newly sworn in Liberals committed to "immediately" launching a national public inquiry into missing and murdered indigenous women and girls in Canada.

Kristen Villebrum (left) and Wendy Bush, are two of a group of about 10 who have been building inukshuks on the Chedoke Rail Trail. (Adam Carter/CBC)
The party said it would seek recommendations for governments, law enforcement and others to help "solve these crimes and prevent future ones." It also promised to spend $40 million on the study over two years.

Villebrun said she's been hearing promises for years – so while there are reasons to hope, she isn't convinced just yet. "We'll continue to do what we're doing until we get our inquiry," she said.

But it's heartening to see people take an interest and ask questions, she said. Shirley Daicon walks the trail about three times a week, and returned for a second time on Wednesday afternoon with her camera just to take pictures and ask about the project's message.
"I think it's amazing what they're doing," Daicon said. "It's pretty incredible."

Sadly, not everyone thinks so. After hours of work, someone knocked down many of the little stone structures that had been erected along the Chedoke Trail's path. That hasn't discouraged Villebrun and her team, though.

"They go back up just as easy as they come down," she said with a smirk.