Greta Thunberg (center) at a climate protest in Berlin 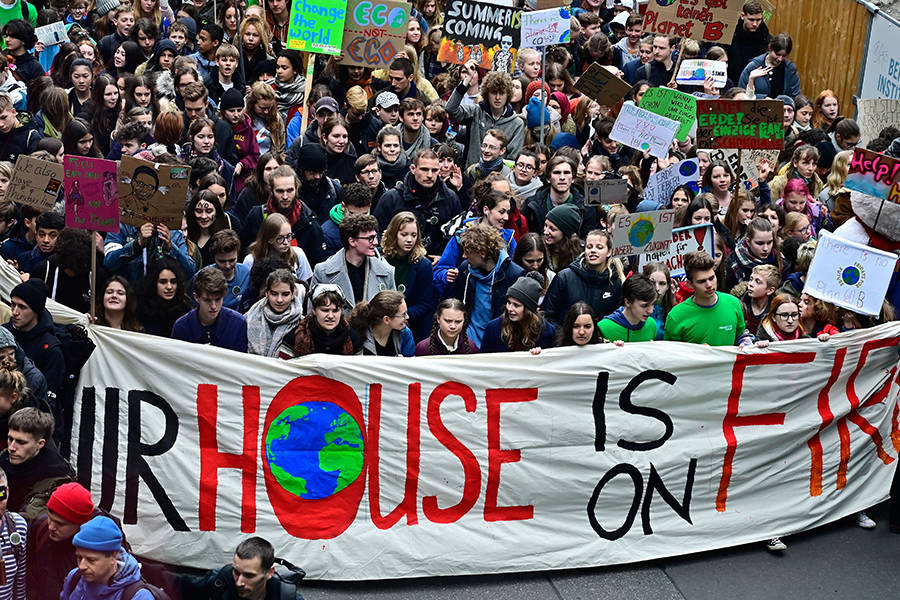 The 16-year-old Swedish high school student speaks for millions of angry youth around the world who fear for their future as the planet warms.

NEW YORK — Alessandro Dal Bon, a 15-year-old Manhattan high school student, is a newly minted organizer in a fast-growing global youth movement that's hoping to pull off the largest climate protest the world has ever seen, with demonstrations planned Friday in 120 countries and all 50 states.

With the New York City public school system having told its 1.1 million students that their absences will be excused if they participate in the strike, there is no telling how large the protest could be in New York alone. Dal Bon and other teens say they are scared by a rapidly warming planet and deeply concerned over what the future may bring. They know that the climate damage from greenhouse gas emissions—and the costs—will only grow if the world doesn't act now.

Like many others, Dal Bon was inspired by Greta Thunberg, the 16-year-old Swedish climate activist who has galvanized the youth movement and is scheduled to lead a rally in New York on Friday. Sign up for InsideClimate News Weekly Our stories. Your inbox. Every weekend.

I agree to InsideClimate News' Terms of Service and Privacy Policy Thunberg's confidence in speaking truth to power has set the tone for a youth-led show of force for climate action this week and next. The teenager has rebuked world leaders for writing off her generation's future so that "a very small number of people" can make "enormous sums of money."

At a congressional hearing this week, she submitted a report from the Intergovernmental Panel on Climate Change and asked lawmakers to listen to the scientists rather than her own written testimony. On Monday, she addresses the United Nations Climate Summit. Climate Activist Bill McKibben, founder of 350.org, said he's seeing people organizing around Friday's global climate strike in ways he's never seen before.

The Global Climate Strike coalition estimated that "millions" of people would take to the streets on Friday. "I've had the privilege of being part of every big climate mobilization that there has been," McKibben said. "So, I think I'm in a position to say that this climate strike is going to be the biggest day of climate action that Earth has yet seen."

Charts: What Does the Climate Future Look Like for Today's Teens?

The movement's momentum has already pushed presidential candidates to address climate change much more explicitly than in the past, as they demonstrated two weeks ago during an unprecedented seven-hour town hall dedicated to climate change and broadcast live on CNN. And some political scientists believe that energy could transform into a powerful 2020 voting bloc, with many polls showing climate change and health care as the top two issues among Democratic voters. ...

Greta Thunberg, who launched the Fridays for Future movement, and Jamie Margolin, co-founder of This Is Zero Hour, testified before a U.S. congressional committee on Sept. 18, 2019. Thunberg submitted an Intergovernmental Panel on Climate Change report and urged members of Congress to read it and listen to the scientists. Credit: Alex Wong/Getty Images

It's more than just spreading awareness, said Cynthia Leung, a 15-year-old climate activist from New York. Leung is pressuring her legislators to amend a state law that governs health education in schools to include how climate change is affecting health. "Young people can be involved in activism in more ways than just organizing and attending rallies," Leung said.

"They can also do what I'm trying to do, introducing policy and basically lobby for legislation." Youth Activism Propelled By Trump Backlash Polls show an increasing awareness and worry about climate change among teens. Most American teens are frightened by climate change, according to a new Washington Post-Kaiser Family Foundation poll, and 1 in 4 are taking action. University of Maryland researcher Dana Fisher attributed the heavy youth involvement in today's climate movement—at least in the U.S.—to the momentum that began with protests surrounding the election of President Donald Trump.

A quarter of the youth activists Fisher surveyed recently reported that their first protest experience was tied to opposition to Trump. She found that nearly half had participated in the 2018 national school walkout against gun violence, and nearly half in the 2017 Women's March, a worldwide protest after the inauguration of Trump, who many viewed as an opponent of women's rights....

Dal Bon, who won't be old enough to vote next year, still believes his voice can help make a difference by continuing to push policymakers to take action. "We're not the ones saying climate change is a problem. It's the science saying that," said Dal Bon, who moved to the U.S. last year after living in Italy, Switzerland and Argentina.

"We want to be in the newspapers, we want to be in the headlines, until the politicians are forced to hear us." Moving the Needle on Climate Progress In the past year, local chapters of Thunberg's Fridays for Future movement have sprung up in major cities around the world. In the U.S., the Sunrise Movement, led by young adults, has also been forcing politicians to publicly rethink their policies on climate change.

The young U.S. activists have succeeded in pushing much of the 2020 Democratic field to the left on climate issues, including getting candidates to pledge to ban fracking and impose a carbon tax.

The Green New Deal they have promoted calls for an all-encompassing, national commitment to get to 100 percent clean energy within 10 years, a public-works program with good-paying federal jobs, and a just transition for workers and polluted communities.

"The things that we've been calling for years—keeping fossil fuel in the ground, banning fracking—are now the policy positions of the leading candidates for the president of the United States," McKibben said. "That's a big shift." Greta Thunberg, who launched the Fridays for Future movement, and Jamie Margolin, co-founder of This Is Zero Hour, testify before a congressional committee on Sept. 18, 2019. Credit: Alex Wong/Getty Images ...

"What we have is ... a bunch of young people who originally cut their teeth in the resistance," Fisher said. "And now these young people are focusing specifically on climate change." Intersecting Goals with Social Justice Climate change is seen by many people as an issue that intersects with nearly every aspect of society, from infrastructure and energy to homeownership and unemployment.

After Superstorm Sandy hit the New York City region in 2012, many of the city's poorest residents have struggled to recover. Patrick Houston, an organizer with New York Communities for Change, said his group's work, which started out focused solely on social justice, inevitably began including climate change, particularly among their New York constituency with ties to Puerto Rico, which is still recovering from the devastation of Hurricane Maria in 2017.

Social justice, in turn, has been a key driver of youth involvement in climate change organizing. "Vulnerable communities should be leading the movement on the climate crisis," said Mitzi Tan, a 21-year-old activist from Quezon City in the Philippines who joined the conference call with McKibben, "because we're the ones most affected by it."