‘Not My Fault’: Women in Mexico Fight Back Against Violence 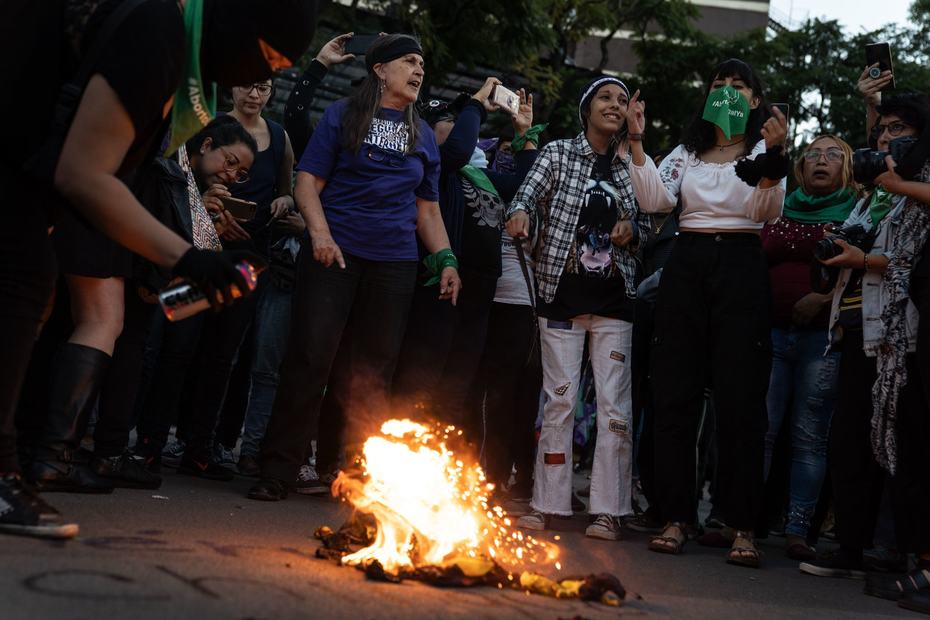 At a recent protest, women in Mexico City burned the flag of a youth soccer team that had made fun of a song that has become an international anthem of the new wave of feminist activism.Credit...Toya Sarno Jordan for The New York Times

‘Not My Fault’: Women in Mexico Fight Back Against Violence

A new generation is demanding change, casting off the entrenched notion that women somehow provoke attacks against them.

ECATEPEC, Mexico — Itan Flores was a young teenager when her first boyfriend imprisoned her for six weeks in a room furnished with just a mattress and a radio. He returned only to rape her, she said, often withholding food and water.

She escaped when he forgot to lock the door one day. He told her that if she ever reported what happened to the police or to her parents, who thought she had gone voluntarily, he would kill her family.

“To this day, my parents do not know I was a prisoner,” Ms. Flores, 24, said, her eyes welling with tears. “For a long time I thought it was all my fault.”

A new generation of Mexican women has taken to the streets in recent months to banish the idea that somehow — with their clothing, their demeanor, their whereabouts — they provoke the violence they suffer. That attitude is so entrenched in society that it extends to the police and the courts.

The anger that is surfacing in Mexico is rippling across much of Latin America, where machismo is common, and law enforcement officials and the authorities can be passive, complicit or in some cases even abusive toward women who try to report it.

The women’s protests in Mexico have been raucous, and at times violent. Protesters have smashed bus stops and shattered the windows of police stations. Some have painted graffiti on monuments and thrown purple glitter at law enforcement officials.

In late November, women filled Mexico City’s giant central square to perform a song by a Chilean women’s collective that first swept the Spanish-speaking world, then spread far, to countries like Tunisia and Turkey. Since then, groups of women have repeated the performance at universities, on the streets or at events like the Guadalajara International Book Fair.

“It was not my fault / neither where I was / nor what I was wearing,” goes the chorus of the chant, called “A Rapist in Your Path.”

Latin America is home to some of the countries with the highest homicide rates in the world, according to Small Arms Survey, which tracks violence globally. Across the region, as data gathering has improved, the phenomenon of gender-based violence is being acknowledged and better understood.

One out of every three women in Latin America has experienced sexual or physical violence, according to the United Nations, but 98 percent of gender-related killings in the region are not prosecuted.

Although violence against both men and women has reached record levels in Mexico, analysts say that many of the violent deaths of women are femicides, killings in which victims were targeted because of their gender.

And the number of women who die violently in Mexico is climbing: It has gone up to 10 killings per day this year, from seven per day just two years ago, according to the Mexico office of UN Women, which is dedicated to gender equality and women’s empowerment.

The growing power of organized crime is also a factor in the rise in attacks on women, said Belén Sanz, the Mexico representative for UN Women, pointing to an increase in sex trafficking and disappearances that she said was likely tied to gangs.

“There is a problem of violence against women that undoubtedly is related to the continuum of violence in general, but you can’t understand femicide without analyzing the amount of sexual and domestic abuse,” she said. ...

... What Mexico and other countries in the region are seeing now is a new generation that knows their rights and has learned to fight for them, said Lourdes Barrera, a member of Las Luchadoras, a Mexico City feminist collective.

“There is a big clash between what they learned and the reality in Mexico: the harassment they suffer in the street, the violence from their partners, the violence you see every day,” Ms. Barrera said.

The vigor of women’s protests has caught Mexican officials off guard. After a protest against police sexual abuse disrupted Mexico City in August, Mayor Claudia Sheinbaum condemned the demonstrators for damaging the Angel of Independence — a statue that is one of the city’s most famous landmarks — and called for an investigation.

Facing an outcry, Ms. Sheinbaum quickly reversed course and met with women’s groups. Late last month, she promised to create a registry of sex offenders with a DNA database and pushed through a city law that makes sharing unauthorized sexual digital content a crime carrying a six-year prison sentence.

But that scramble to respond in the capital finds little echo on the city’s periphery. In Ecatepec, a sprawling working-class suburb, women say the police do not protect them and are sometimes the attackers.

“Living here means being forced to survive,” said Ms. Flores, the woman who said she was abducted by her boyfriend as a teenager. “It means always being on alert, always watching over your shoulder. It means being totally paranoid.”

Forced to fend for themselves, women are forming groups to demand justice for unsolved crimes, to question long-held attitudes and to push the government into action.

Ms. Flores joined five other women — including Magda Soberanes, 28, who was assaulted by her partner and ended up in the hospital — to create a collective called Women of the Periphery for the Periphery.

But when they met with Ecatepec’s mayor earlier this year, he told them there were no funds to protect women. And when they sought Ecatepec’s women’s agency to talk about the number of women who had disappeared in the area, the director discounted the reports, Ms. Soberanes said.

Grisel Barrientos, the director of the agency, said in an interview that documented cases of disappearances in Ecatepec show that most of them involve women who are later found to have left on their own.

Met with such obstacles, women do what they can to protect themselves. They trade WhatsApp messages and share their locations during commutes. They carry whistles, pepper spray and sharpened pencils in case they are attacked. Many change into trousers to take public transportation after dark, and they are sure to stay alert.

“It is unthinkable to fall asleep on the bus, no matter how long the commute is,” said Lucía Camacho, another member of the women’s group. “That is a man’s privilege.”

The group organizes self-defense classes with a karate instructor and stages art performances to highlight how impunity persists.

On a recent day, before an audience of criminology students, four of them donned black robes covered with the phrases men throw out in catcalls. Imagining the voices of the victims, they described murders that remained unpunished.

“These young women are taking to the streets to reclaim their dignity, and they are teaching us great lessons,” said Eréndira Cruz, a special investigator of women’s issues at the National Commission for Human Rights in Mexico.

“In the face of despair, they represent a profound hope,” she said.