Poland Is in Revolt Against Its New Abortion Ban (2020) 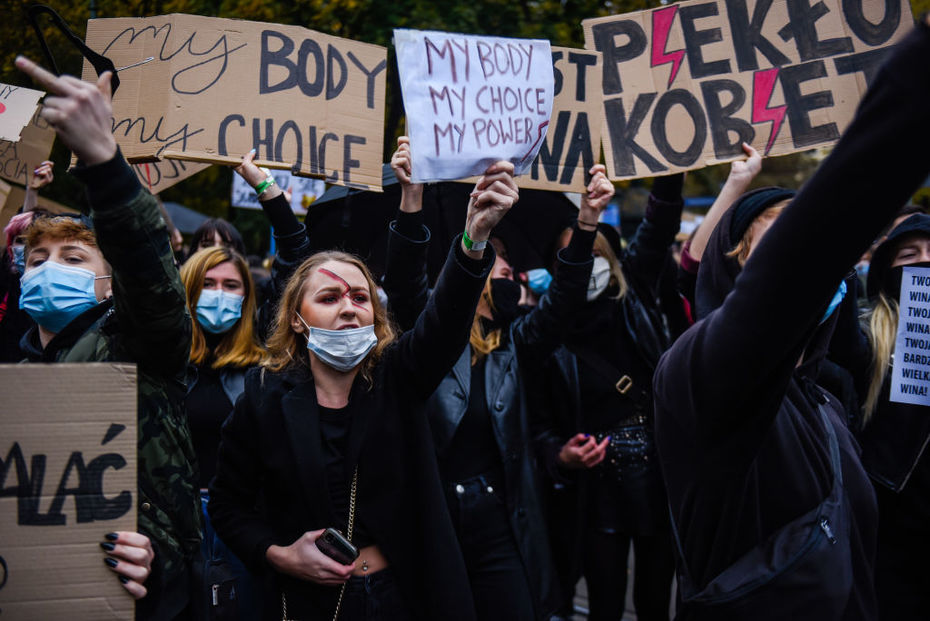 The fourth day of protests in Krakow, Poland against the Constitutional Court ruling on tightening the abortion law. (Omar Marques / Getty Images)

Poland Is in Revolt Against Its New Abortion Ban
By Ewa Majewska, Jacobin, Oct 27, 2020

Last Thursday, Poland's Constitutional Court banned almost all abortion, as part of a wider Catholic-conservative offensive against women's rights. But the ruling has already sparked strikes and blockades across Poland — and the working-class women least able to afford a clandestine abortion are leading the revolt.

The ban on abortion, introduced in 1993 by the Polish Parliament, and fixed as the law by the Constitutional Court in 1997, was one of the milestones of Poland’s transition from state communism to neoliberal capitalism.

The law established in 1997 allowed abortion in three situations: when the pregnancy resulted from rape, when the life or health of the woman was in grave danger, or when the fetus risked severe illness or death. Last Thursday, a ruling of the Constitutional Court has made it illegal to terminate pregnancy also in this third situation.

Given that the majority of the legal abortions conducted in Poland were performed because of this third reason, the ruling means that there will be almost no abortions in Poland — officially, that is. Unofficially, according to one of the country’s main feminist organizations, the Federation for Women and Family Planning, some hundred thousand abortions are made in Poland annually.

Various organizations in Poland and abroad help Polish women to get abortion pills or otherwise terminate pregnancy. The current law does not punish women for terminating pregnancy — but, by imposing up to three years’ imprisonment for helping women to terminate a pregnancy, it endangers the doctors as well as the providers of pharmacological aid.

Last Thursday’s decision was taken under Poland’s conservative Law and Justice (PiS) government. Yet every political option has managed to betray women already. There were the social democrats, who had the necessary majority in Parliament to change the drastic anti-abortion law in 2004, but chose not to do so, as they needed the church’s support for Poland’s accession to the European Union. Or take the liberals, who claim that that the law established in 1997 was a “compromise.”

Having kept Poland in a state of constant anxiety about abortion since at least 2016, the conservatives now decided to push it further, again using the Constitutional Court. Jarosław Kaczyński, the leader of the ruling PiS, said in 2016 that women should keep risky pregnancies and give birth no matter what, even if the fetus dies.
Paying the Price

As with all things, abortion also has its class dimension, basically dividing the Polish society into those who can afford it, and those who cannot. It obviously matters, whether you live in a metropolitan area or in regions, where all doctors refuse to terminate pregnancies because of their “conscience.”

One of the most popular feminist slogans today says: “We want doctors without conscience!” In recent years, the liberal narrative of “choice” has been replaced by that of “need”; this, not to deny women’s right to choose, but to emphasize that most women do not have a choice when it comes to abortion.

Regardless of whether you decide to do it in Poland or abroad, it costs between 50 and 100 percent of your monthly salary — depending on the city, the form it takes, and its general accessibility. Indeed, every newspaper in Poland advertises abortion — albeit under the name of “inducing menstruation” or “regulating the menstrual cycle.” Many doctors who refuse to carry out terminations in public hospitals, agree to perform abortions in private clinics. It is all a question of money — and connections.

... In recent decades, “the state of exception” has generally been discussed as a way of expressing the exceptional condition of refugees and undocumented migrants — the fact of being outside of the law. Necropolitics, a term coined by Achille Mbembe, shows how the neoliberal, globalized biopolitics governs the contemporary world by carelessly allowing the exposure of entire groups and populations to death.

I believe that today women in Poland are such a group, exposed to the risk of death by those who claim to continue the Christian heritage in Polish state institutions and the Catholic church. The perpetuation of the neoliberal pact of conservative values and liberal market takes the form of the oppression of women, in the name of traditionalist values.
Resistance

But wherever there is control, there is always resistance. And Polish women contested, undermined, and struggled against the abortion ban since day one.

In 1997 approximately a million signatures were collected for a referendum on abortion. In April 2016, faced with the first efforts to further restrict access to abortion, 100,000 women immediately joined feminist groups created ad hoc online. Some 150,000 marched in different cities and towns in Poland in what soon became known as “the Black Protests,” leading to the Women’s Strike and eventually the International Women’s Strike.

This resistance is again apparent today. On Monday, October 26, some thirty cities and towns in Poland were blockaded by cars, bikes, and pedestrians in spontaneous protests in support of the rights of women. The day before that, farmers used their vehicles to block streets in several small towns to protest the newly established abortion ban.

Following the first demonstrations on Friday October 23 — the day after the ruling — protests have extended from big cities to small towns and villages around the country. A rough count suggests that protests took place at least in seventy locations in Poland, as well as in some twenty towns and cities abroad.

A general strike has been called for Wednesday, and many workplaces have already begun declaring their support for the women’s cause. A new and very popular element of the protest is for feminists to visit churches in order to advocate for the right to abortion and women’s rights. The activists enter churches, and standing there, hold banners and distribute leaflets. This usually happens peacefully, without violent clashes.

The current protests do seem to have a slightly different vibe than those held previously — now we are mad, not just unhappy, and the main slogan is a swear word, “wypierdalać!”, which can be translated as: “get the fuck out of here!”

If they did do so, the deeply unpleasant Kaczyński and his conservative colleagues might have some trouble finding anywhere else to go. But Poland’s feminists have more serious problems to deal with.

Ewa Majewska is a feminist philosopher of culture, lecturer at the Art Academy in Szczecin, Poland. She worked at the University of Warsaw, was a visiting fellow at the University of California, Berkeley, as well as a stipended fellow at the IWM (Vienna) and ICI Berlin. She is the author of three monographs; the coeditor of four volumes on neoliberalism, politics, gender, and education; and has published in Signs, e-flux, Third Text and other journals and magazines.