Jimmy Carter's call for an end to violence against women 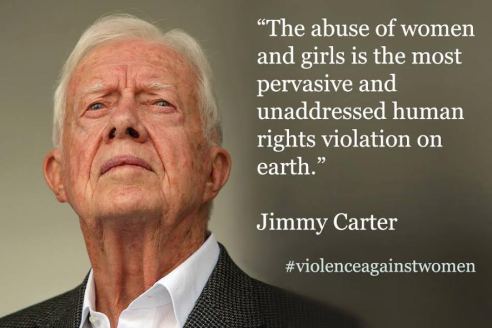 In the 33 years since Jimmy Carter was president, he has traveled to 82 countries. During his journeys, he has become increasingly frustrated with the way women and girls are treated.

He has been disturbed at sexual slavery through prostitution, the custom of genital cuttings, child marriages and dowries, spouse abuse, the so-called “honor killings” of women, rapes, and what he calls the “genocide” of female infants around the world through abortion or murder because parents prefer a male child.

Which is why Carter, 89, decided to write, “A Call To Action: Women, Religion, Violence, and Power.”

While much of the book deals with the problems of gender discrimination and the mistreatment of women around the world, Carter does not give the United States a pass.

Carter said he is deeply concerned about how sexual assaults are handled in two American institutions with which he has ties – academia and the military.

Having taught at Emory University in Atlanta for more than 30 years, Carter said colleges and universities are reluctant to prosecute cases of sexual assault. “We have horrendous abuse in some of our finest institutions,” Carter said.

Colleges tend not to want to admit there are problems. The boy often claims the sex was consensual, and there is often alcohol involved. It is estimated that 1 in 5 females on American campuses is sexually assaulted, but only 4 percent of assault cases are ever reported.

In many cases, Carter said, the assaults are committed by “serial rapists,” who repeat their crimes knowing their chances of being punished are small.

As a Naval Academy graduate, Carter said there is the same unwillingness by those in authority in the armed forces to confront a problem that they would rather not deal with.

A deeply committed Christian, Carter still teaches Sunday school in Plains, Ga. But his church withdrew from the Southern Baptist convention in 2000 over doctrine that women should be submissive and that women could no longer serve as deacons, pastors or chaplains in the armed forces.

Carter said he understands how some might interpret the Scriptures, particularly the writings of Paul, to reach their conclusions. But he notes that there are 31,000 verses in the modern Christian Bible, and people may choose the verses they prefer.

“If you go back to the teachings of Jesus Christ,” Carter said, “he exalts women.”

“It is ironic,” Carter writes, “that women are now welcomed into ascendant positions in all major professions and other endeavors but are deprived of the right to serve Jesus Christ in positions of leadership as they did during his earthly ministry and for about three centuries in the early Christian churches.”