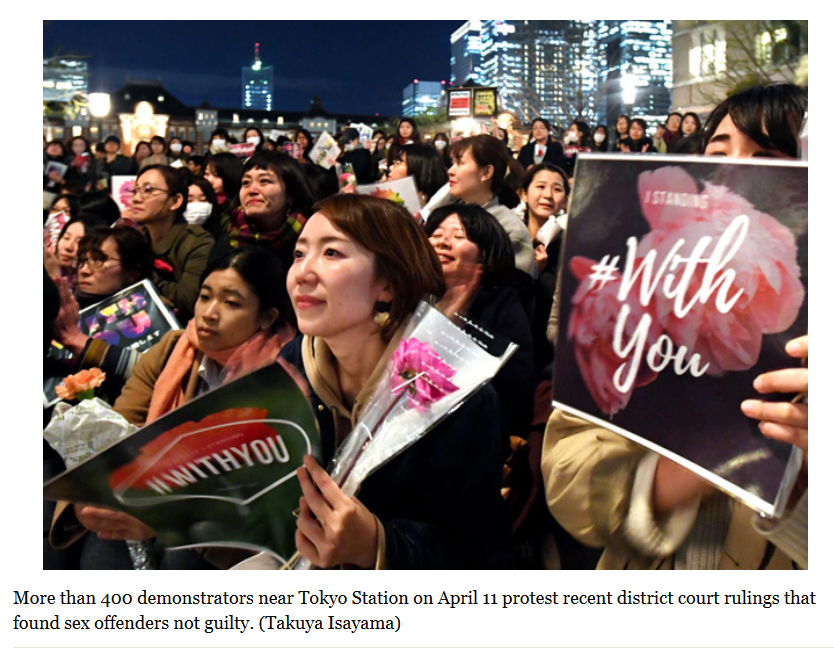 More than 400 demonstrators near Tokyo Station on April 11 protest recent district court rulings that found sex offenders not guilty. (Takuya Isayama) Hundreds of people in Tokyo protested recent court rulings in which the judges recognized that rapes had occurred but allowed the perpetrators to walk because the victims could have offered more resistance.

At a rally called “Standing demonstration protesting sexual violence and sexual violence court rulings” near Tokyo Station on April 11, the demonstrators expressed disgust with the rulings and held signs that read “#MeToo,” “Yes Means Yes!” and “Give judges an education on human rights and sex!”

“I am confounded and terrified by the not-guilty rulings,” said Minori Kitahara, a writer and activist. “I am afraid that victims of sexual abuse will not be able to raise their voices after such verdicts were given.”

Under Japanese Criminal Law, sexual offenders cannot be punished only for committing non-consensual sex. To win convictions on charges of forced sexual intercourse, prosecutors must prove that the attackers’ excessive violence or intimidation made it “extremely difficult” for the victims to put up resistance.

In cases in which assailants rape victims who are unable to resist for reasons that include unconsciousness from drug or alcohol consumption, prosecutors apply charges of quasi-forced sexual intercourse. To win guilty verdicts on this charge, prosecutors must show that the victims had an “incapacitation to resist.”

In the case before the Nagoya District Court’s Okazaki branch, prosecutors argued that a daughter was incapable of resisting her father’s rapes because of his long history of violence and sexual abuse. He was charged with quasi-forced sexual intercourse in relation to two attacks against his then 19-year-old daughter in Aichi Prefecture in 2017.

The court acknowledged that the daughter “did not consent” to sex with her father and that she had been sexually abused since she was a junior high school student. The court also said the father used violence against the daughter shortly before he raped her.

But after describing the accused’s acts of sexual abuse as “utterly unacceptable,” the court found him not guilty, saying the daughter “was not in a state in which resisting her father was extremely difficult.” The ruling added that the father-daughter relationship was not characterized as a strongly subservient one that forced her to blindly accept his authority. The ruling sparked outrage from the public and many legal experts.

Hisashi Sonoda, a professor of criminal law at Konan University’s Law School in Kobe, called the court decision “unreasonable.” “The court acknowledged the father’s sexual abuse of the woman, but it found him not guilty because it did not recognize that he controlled every aspect of her personality,” said Sonoda, who is also a lawyer.

He also said the ruling is questionable in light of precedents that recognized the inability to resist from a psychological viewpoint. During the trial, prosecutors submitted as evidence a written opinion of a psychiatrist who examined the daughter and concluded that her psychological condition put her in a state in which she could not resist his sexual assaults.

Akira Kitani, a lawyer who had long served as a criminal court judge, also criticized the district court’s ruling. “The verdict is far from compelling,” he said. “The human rights of the accused should be respected, and the ruling will not be able to gain the public’s understanding.” Prosecutors have appealed the court’s decision.

The ruling was especially tough for victims of sexual abuse. Jun Yamamoto, who leads the Spring