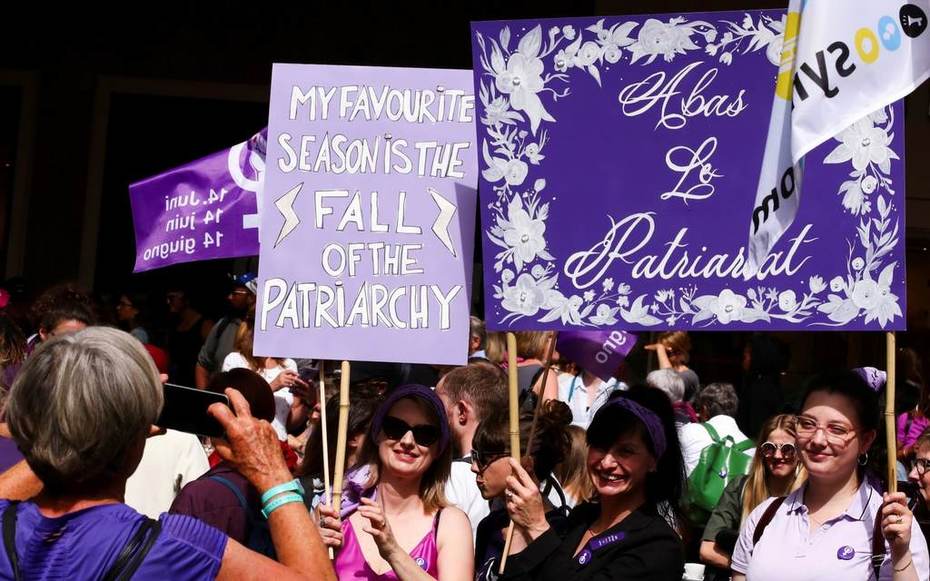 Swiss women are on strike against the gender pay gap that means men make 20pc more than them for no particular reason Credit: STEFAN WERMUTH/AFP

Thousands of women on Friday staged “purple” strike protests across Switzerland against the country’s “scandalous” gender pay gap after a study found they earn a fifth less than their male counterparts.

It may have a reputation for being a highly developed, affluent and progressive Western economy but Switzerland is falling behind many counterparts on pay parity, say rights groups and unions.

While the country has one of Europe’s highest proportions of women in the workforce, on average they still earn 20 per cent less than men. And for men and women with equal qualifications, the wage gap remains nearly eight per cent, according to the federal statistics office.

At 42.9 per cent, the proportion of the gap that could not be pinned down to considerations such as age or seniority in the survey had reached its highest since 2000.

Work stoppages are extremely rare in Switzerland since employers and unions signed the "Peace at Work" convention in 1937 encouraging negotiation rather than strikes.
A woman takes part in a nation-wide women's strike for wage parity, on June 14, 2019 in Swiss capital Bern.

But organisers called upon women to eschew jobs and housework chores for the day in protest. For those women unable to take a full day off work, they were urged to leave by 3.24 pm.

"After that, women work for free," said Anne Fritz, the main organiser of the strike and a representative of USS, an umbrella organisation that groups 16 Swiss unions.

A raft of events was planned throughout the day ranging from pram marches to whistle concerts and giant picnics.

Organisers called on women to unfurl a sea of purple, the colour of their cause, in huge demonstrations planned in several cities, including in front of the government headquarters in Bern.

Some had already started overnight Thursday.

In Lausanne, women rang the bells of the cathedral, which was lit up in purple, and lit a "bonfire of joy". Hundreds then took part in a massive breakfast celebration, blocking traffic on one of the town's main bridges.

In Zurich, demonstrators traipsed a giant, pink clitoris atop a cart through the city, while in Basel they projected the feminist fist symbol onto the skyscraper headquarters of pharmaceutical group Roche.

In Bern, MPs observed a 15-minute break to mark the occasion, with many members wearing purple or feminist badges.

Despite such parliamentary support, the strike is partly in frustration at politicians’ failure to get tough with pay inequality.
The Cathedral is lit in purple to underline the country's poor record on defending the rights of women and families in Lausanne, Switzerland,
Equal pay for equal work is inscribed in the Swiss constitution but not respected say protesters Credit: DENIS BALIBOUSE/ REUTERS

A bid to change the law to impose more oversight over salary distribution was watered down last year. The final text only applied to companies with more than 100 employees -- affecting fewer than one per cent of employers. It failed to include sanctions for persistent gender pay gap offenders, the vast majority in small companies.

“The wage divergences between women and men have become entrenched,” said the SGB union federation. “It is scandalous that women, who have now surpassed men in education, still earn about a fifth less than men.”

The strikes come exactly 28 years after half a million women snubbed their workplaces or homes across Switzerland to protest persistent inequalities. That was 10 years after equality between the sexes was enshrined in the Swiss constitution.

“The Swiss constitution promises equal pay for equal work but it’s still not reality. In academia or on boards of directors and management, there are almost no women the higher you go up the career ladder,” she told the Telegraph.

She added: “We are an economically progressive country but culturally we are always a bit behind the rest of Europe. Women only got the right to vote in 1971, which is one of the latest in the world.”

Last month, a survey by the International Labour Organisation placed Switzerland bottom of the list in pay rates between men and women in senior roles.

A 2018 report by the World Economic Forum put it 44th in the world for wage equality for similar work; the United Kingdom fared even worse, coming in 64th place.