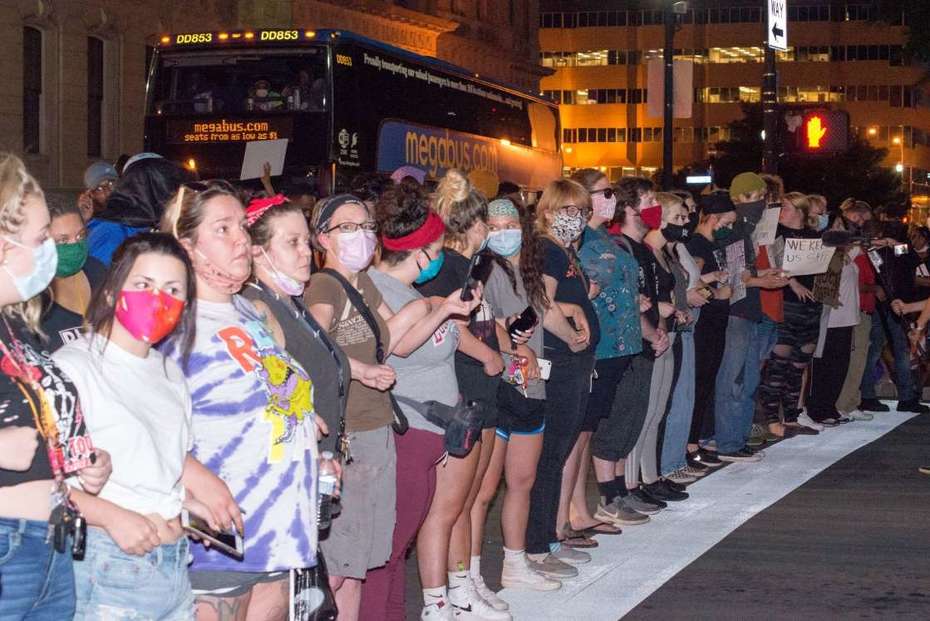 © Tim Druck A line of almost all white women formed between police officers and black protesters at Thursday night's rally in downtown Louisville calling for justice in the death of Breonna Taylor.

The FBI has opened an investigation into the shooting death of Kentucky EMT Breonna Taylor
By Scottie Andrew, CNN, May 21, 2020

Breonna Taylor, 26, was killed during a police raid of her Kentucky apartment. Now, the Louisville Metro Police Department will change its policy to require body cameras and change search warrant sign-offs.

(CNN)The FBI has opened an investigation into the shooting death of Breonna Taylor, an EMT who was killed after officers forced their way inside her home.
Robert Brown, special agent in charge for the FBI Louisville, issued a statement Thursday that said in part, "The FBI will collect all available facts and evidence and will ensure that the investigation is conducted in a fair, thorough and impartial manner."
As this is an ongoing investigation, Brown said they aren't able to comment further.
The news follows the Louisville Metro Police Department announcing that it would require all sworn officers to wear body cameras and change how the department carries out search warrants. They're the first steps toward improving police accountability, Mayor Greg Fischer said at a news conference, in which he repeatedly referred to Taylor's death as a "tragedy."

In March, Taylor was shot at least eight times when three officers forcibly entered her apartment to serve a search warrant in a narcotics investigation. The department said the men announced themselves and returned gunfire when Taylor's boyfriend fired at them.

But in a wrongful death lawsuit, Taylor's mother says the officers didn't knock at all and should have called off their search because the suspect they sought had already been arrested.

Officers didn't find drugs in her apartment when they entered, Taylor's mother said in the lawsuit.

Going forward, "no-knock warrants," which allow police to enter a residence without announcing themselves or their purpose, must be signed off on by a judge and the police chief or his designee before police can serve them, Fischer said at a news conference Monday. Previously, the warrant required only a judge's sign-off.

Now, the department will require all sworn officers to wear body cameras while they serve warrants and in other situations in which they identify themselves as police officers, Fischer announced.
"This is an important moment in the history and evolution of our city," the mayor said. "At metro government, we're going to do everything we can to channel the pain and anger of this moment into dialogue, into work that will eventually help us heal and over time make us a stronger, safer and more connected community."

"As an African American, black folks are tired of talking, tired of meeting," Green said during the conference. "I can't take another meeting where there's not actually something that specifically happens." ...

This week, the department's public integrity unit shared the investigation file for Taylor's case to the Kentucky Attorney General's Office and will soon share the file with the FBI and the US attorney.

Taylor's boyfriend, Kenneth Walker, was arrested and charged with attempted murder of a police officer and first-degree assault. He was released for home incarceration and is scheduled to appear in court in late June.