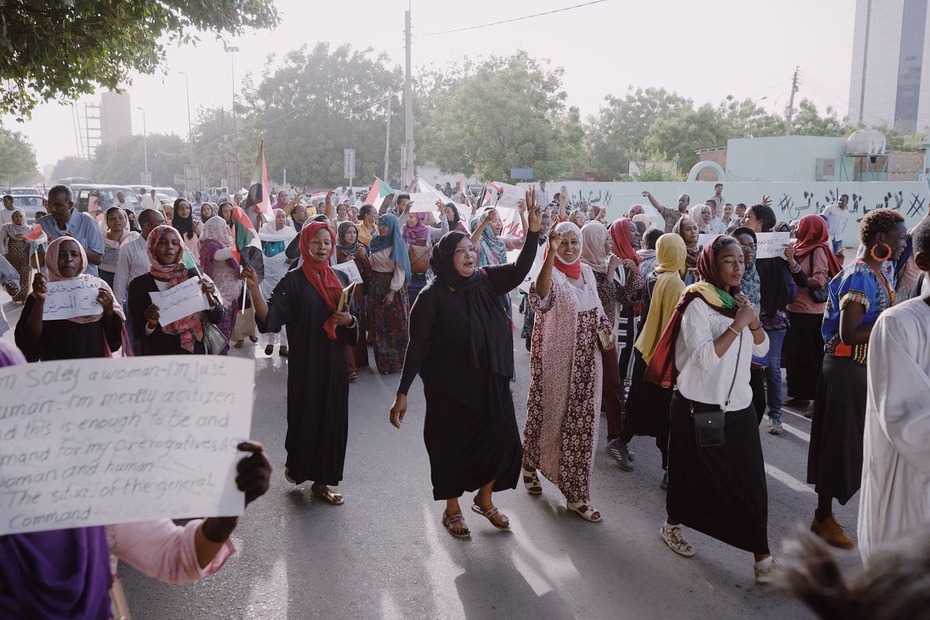 In April, Sudan's president was overthrown after 30 years in power. With the shift in power, Sudanese women are demanding equality and decision-making power.

After three decades of dictatorial rule, Omar Hassan al-Bashir is out of power — the most obvious achievement of Sudan’s biggest protest movement.

But in the crowded streets of Khartoum, an even more indelible shift is taking place: Women, who were deprived by Bashir of freedoms afforded to men, are demanding equality.

From the stages at the center of a massive sit-in here to the tea stalls that dot its periphery, women addressed the new military government and the organizers of the protests, who are almost all men, saying: You will not overlook us.

Protest leader Halima Ishaq’s voice, amplified by a speaker system, easily overtook the hum of the crowd this past week. She is a refugee from Darfur, where Bashir is accused of orchestrating a genocide and mass rapes over a decade ago. She is a master orator, unafraid of ideas some here might find radical.

“We cannot get our freedom unless we are essential parts of the new government, not in soft positions in which decisions are not made,” she said in an interview before another speech. Men walking through the sit-in paused to contemplate her words.

“The laws that limit women must be lifted,” she said. Under Bashir, a quarter of parliamentary seats were reserved for women, who were mostly stand-ins for their husbands, many political analysts said. Laws in Sudan compel women to get a male relative’s approval to marry or divorce and govern how they can dress.

Bashir’s interpretation of Islamic law was more lenient than, say, that of Saudi Arabia, where women have only recently been allowed to drive on their own. But Sudanese society is deeply conservative, and in addition to discriminatory laws, powerful societal roles such as judge or minister are entirely closed off to women.

Mohamed Yusuf al-Mustafa, the head of the Sudanese Professionals Association, which has been leading the protests, said he hopes a new civilian government will promote women’s equality.

“The ideology of the former regime was violently opposed to women’s rights. The mandating of 25 percent women in the legislature was for purely decorative purposes,” Mustafa said. “That is not how we see it — women are at every level of our structure. Leadership for us is based on merit.”

Mustafa’s support is seen as an improvement by some women. He and other male protest leaders have talked about increasing representation of women in parliament to 40 percent. But 40 percent is not equality. “We aim and aspire for 50 percent,” said Tahani Abbas, a lawyer for an organization called No to Women’s Oppression. “We want fair and equal participation based on qualifications.”

Despite the ubiquity of women in the protests, meetings between protest leaders and the military council are mostly attended by men and announced by men and do not explicitly address the demands of women.

Tahani Abbas of the group No to Women’s Oppression gives a speech during the march in Khartoum. (Muhammad Salah for The Washington Post) Bashir was deposed this month by former military allies who now occupy his palace in central Khartoum.

The negotiations to form a civilian-led government have moved slowly, with some calling them a “stalemate.” Mustafa’s organization is demanding that all executive power be handed over to civilians for an extended transition period until elections can be held.

The military council is seeking a hybrid military-civilian government. Protesters have vowed to remain camped in downtown Khartoum until their demands are met. Sudan has experienced waves of protests in the past but none as powerful as the ones that continue to swell here.

While women may not outnumber the men at the current sit-in, they chant just as loud and know all the words to the protest music that blares from speakers. Women draw up banners, paint protesters’ faces and bring their daughters into the middle of the revelry.

Many, such as Awadia Koko, have been at every protest against Bashir since he took power in a coup in 1989 — and have been imprisoned for taking part. Koko now leads a tea-sellers union that counts 26,000 women as members. “I was harassed and detained by the security apparatus a lot,” she said. “I was put in jail because I helped women.” She said she was regularly harassed by police for not dressing in the conservative fashion compelled by Sudan’s “public order” laws. “Right now, in the new Sudan, we want all the things of the past to go away,” she said, “all the fines and fees, the public order laws, the secret prisons.”

Ishaq, from the Darfur area, and Koko, from the Nuba Mountains region, represent a wider struggle for racial and ethnic equality in Sudan. Bashir exploited Sudan’s divisions as a means of staying in power, playing regional militias against one another but always retaining the upper hand.

Ishaq and Koko’s home regions were decimated by conflict, and millions remain homeless.

A protester speaks at the sit-in in Khartoum. (Muhammad Salah for The Washington Post)

People displaced by the vicious campaigns of Bashir’s military have been welcomed by protesters from the capital, and the sit-in’s speeches are peppered with nods to unity. “We are all Darfur,” goes one of the most popular refrains.

Bashir’s military spending left little room for the development of health and education infrastructure, putting an extra burden on women, who are traditionally seen in Sudan as having sole responsibility for raising children.

Discrimination based on ethnicity, class and gender are all bundled together around women such as Ishaq and Koko, said Sara Abouh, a former member of parliament and now a professor at Khartoum University.

“But this is a patriarchy. Women are suppressed by any means, and men are terrified of all this changing. What did they expect? It had to be revolution.”