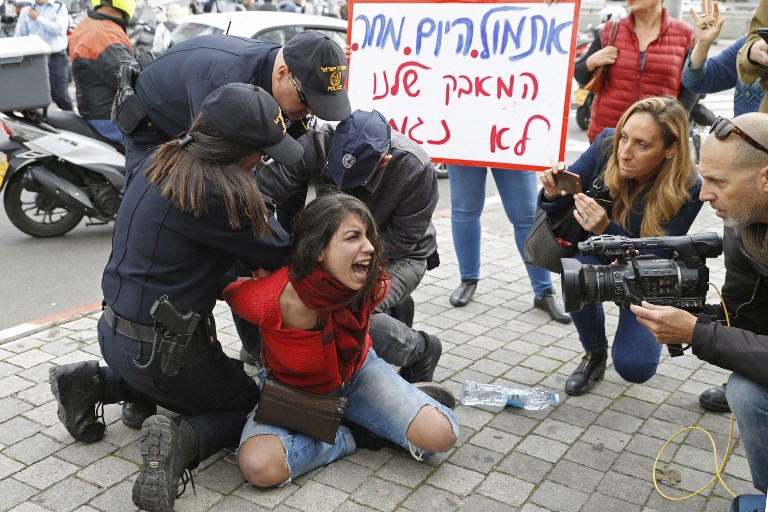 Organizers demand funding for campaign against such incidents, call on supporters to strike daily for 25 minutes – one for each woman killed in domestic violence this year

Demonstrations were held in major cities around the country Wednesday in protest of violence that has claimed the lives of up to 25 women in the country since the beginning of the year.

Two women were arrested during a protest in Tel Aviv when they tried to block a road. Other rallies were held in Jerusalem and Beersheba.

The protests came a day after a woman was found stabbed to death in an apartment in the northern coastal city of Acre. Though police are still investigating the case, female activists have said they believe she is the 25th victim of fatal domestic violence in 2018.

“Following the women’s protest at Kaplan Junction in Tel Aviv, two women who refused to listen to police instructions were arrested on suspicion of disrupting public order and for attempting to burn tires,” police said in a statement. “They were taken in for questioning at the police station.”

One of the women arrived at the square with a car full of tires and the other was carrying blazing torches and refused to cooperate with police, reports said.

The protests began at 10 a.m. and continued for 25 minutes, one minute for each woman killed in domestic violence in 2018 — a number that includes the Acre woman whose body was discovered Tuesday and whose killer has not yet been determined.

The Association of Secondary School Teachers in Israel said that its members would strike for 25 minutes in support of the protests.

Organizers have called on women across the country to continue protests by striking every day at 10 a.m. for 25 minutes until the government approves a stalled NIS 250 million ($66 million) budget for a campaign targeting violence against women.

“We will not let this matter slip from the agenda, and we will not accept any more talks and committees,” organizers said in a statement. “We have a concrete demand, a budget that has been stuck for more than a year and half, and we will not stop until our demands are met. The protest continues.”

On Tuesday 29-year-old Iman Awad was found at home in Acre with her throat slit. Police arrested her husband and he was to be brought for a remand hearing later Wednesday.

Awad’s husband denies any involvement in his wife’s death and his lawyer said he has given a detailed alibi to police that can be confirmed from security camera footage.

Last week thousands of women went on strike and tens of thousands rallied across the country to protest women killed by a partner, family member, or someone known to them, and what they say is the authorities’ failure to stem a sharp increase in violence against women.

The protests came after the bodies of two teenage girls, slain in separate incidents, were found on November 26.

There have been several protests targeting government inaction since the murders, with activists also coloring the waters in several public fountains blood-red, including a fountain outside the Prime Minister’s Residence.