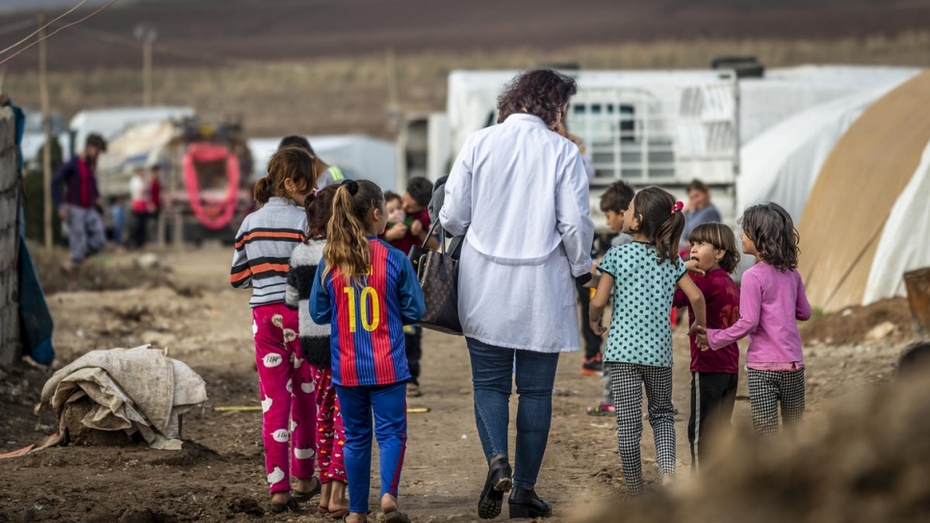 Having treated more than a thousand Yazidi women who escaped captivity, gynaecologist dedicates herself to helping them rebuild their shattered lives.

Nestled at the end of her sofa in the soft light of a standard lamp, a lined notebook balanced on her knees, Nagham Nawzat Hasan often takes time at the end of the day to record the harrowing accounts she has heard from escaped Yazidi women who were abducted from their homes in northern Iraq and held captive by ISIS.

Since devoting her working life four years ago to helping these women recover from their ordeal, the 40-year-old gynaecologist has helped more than a thousand survivors, transcribing countless pages of horrors as part of a personal ritual that has become part testimony, part therapy.

“I have more than 200 stories written down. I feel like I have to record this for history,” Hasan explained. “I would get home and cry, thinking about all that I had heard. It affected me psychologically. I am also a Yazidi, and a woman. Writing their stories down helps me to relieve some of that trauma.”

The Yazidi community from Sinjar in northwestern Iraq, whose ancient religion has its roots in Sufism and Zoroastrianism, were targeted by the militant group in August 2014. Armed fighters separated men and boys older than 12 years from their families and killed those who refused to adopt their beliefs.

“I would get home and cry, thinking about all that I had heard. It affected me psychologically.”

It is estimated that more than 6,000 Yazidi women and girls were kidnapped and sold as slaves, and held in captivity for months or even years. Many were subjected to imprisonment, torture and systematic rape, as part of a campaign of persecution that the UN has deemed a genocide and a crime against humanity. To this day, the fate of more than 1,400 Yazidi women remains unknown.

Hasan was working at a hospital in Baashiqa – a town 14 kilometres northeast of Mosul – when the area fell to the militants. As she and her family fled to Duhok, in the Kurdistan region of northern Iraq, they began to hear the reports of Yazidi men being massacred and women and children being abducted.

A few months later, Hasan became aware of two Yazidi women that had arrived in Duhok after fleeing their captors. In seeking them out, she unknowingly changed the course of her own life.

“When Yazidi women began escaping to Duhok, that’s when my work started,” Hasan said. “I saw immediately that they were destroyed. They had lost all trust in people, so I set out to rebuild that trust.”

“I approached women and encouraged them to seek help and treatment. I gave them my phone number and slowly built up trust. Before long, newly escaped women began calling me themselves.”

Her work was secretive at first as people struggled to come to terms with what had happened. As the scale of the atrocities committed against the captives became clear, religious and social leaders issued calls for the abducted women to be welcomed back into the community.

“The Yazidi community played a huge role. They were the first ones to receive these women back,” Hasan explained. “Acceptance by their families and support from the community was an important step, but they needed more.” ...

Her experience as a gynaecologist proved essential, but it soon became clear that the needs of the survivors went far beyond their physical treatment. “Medically, most of them suffered from pain. Many had sexually transmitted infections as a result of numerous rapes. But psychologically, the state of survivors was extremely bad.”

“I did not have a magical treatment, but being a woman and a Yazidi, I saw most survivors trusted me.”

“I did not have a magical treatment, but being a woman and a Yazidi, I saw that most survivors trusted me.”

Building on the relationships she was able to forge, Hasan began to devote more and more of her time to visiting survivors in their homes, where they felt safest. Two years ago, she set up her own NGO called Hope Makers for Women, which provides medical and psychological support to female survivors living in camps set up to house displaced Yazidis.

On a dazzling early winter’s morning at a tented camp near Mosul Dam Lake, Hasan arrives on one of her regular visits and is greeted like family by a group of half a dozen smiling Yazidi women, who smother her in hugs and kisses. Later she visits one of her regular patients, a young woman who was held captive for nearly three years along with her three daughters.

“Life was very bad after we first escaped from ISIS, and in the beginning I couldn’t even go outside my tent,” the young mother explained. “She made herself fully available to us. She treated us and looked after us. The doctor helped me find a strength I didn’t know I had.”

Hasan points to the living conditions still endured by many survivors, which she says make it harder for them to recover from their ordeal. “To have escaped ISIS and then have to spend two or three years living in a tent in a camp, with no work – how can they truly recover in that situation?”

As well as providing ongoing humanitarian assistance to displaced Yazidis, UNHCR – the UN Refugee Agency – has worked with partner organizations to establish uniform standards for counselling, to ensure that Yazidi women and girls all receive satisfactory care. ...

Hasan says international support for the Yazidi people must be maintained if they are to ever truly recover from the crimes committed against them. “International support for the Yazidis has decreased since the liberation of Mosul. Some, like UNHCR and UNFPA, are still offering assistance, but support overall is going down. I’m concerned that in future this support will disappear entirely.”

“Each one of us fought ISIS as much as she could, but you fought them with the most powerful weapon the day you decided to treat us. This brought our souls back to life.”

She is calling on the international community to offer more resettlement places to Yazidi survivors who choose to make a fresh start elsewhere. Those that opt to stay in Iraq, meanwhile, require financial assistance to help re-establish their lives outside the camps, as well as training and job creation schemes to boost their economic prospects, she added.

For Hasan herself, the work of helping Yazidi survivors and others who have lived through similar experiences will continue. “This is now what I want to do with my life. I became a doctor to care for people and help those in need. I am still a doctor, but I’ve gone from working in a hospital to working as a humanitarian.”

Next to her notebooks filled with tales of suffering and pain lies another book that serves as a reminder to Hasan of the purpose behind the life she has chosen. One of the first survivors she worked with was the author and Nobel Peace Prize winner Nadia Murad, who six months ago sent Hasan a copy of her memoir.

A handwritten dedication inside reads: “To dearest Dr. Nagham. Each one of us fought ISIS as much as she could, but you fought them with the most powerful weapon the day you decided to treat us. This brought our souls back to life.”