Criminalize Johns And Pimps Not Women

Supreme Court of Canada to make a decision on prostitution law Dec. 20

On Friday, December 20th, the Supreme Court of Canada will make a decision on whether to throw out Canada’s current prostitution laws, keep them, or look to an alternative.

The decision is precipitated by Bedford v. Canada, a legal challenge arguing the current laws are unconstitutional.

It isn’t technically illegal to buy sex in Canada, but many of the laws surrounding prostitution criminalize it: communicating for the purposes of prostitution, operating a bawdy house (brothel), or living off the avails of prostitution (pimping).

Back in March 2012, Ontario’s Appeal Court ruled to strike down the law against bawdy houses but upheld the communication law. The court found that “living on the avails” of prostitution should apply only in “circumstances of exploitation.” The Federal Government appealed the decision and the rulings were put on hold pending a decision at the Supreme Court.

Feminists organizations, Aboriginal women’s groups, sexual assault ... hope the Court will consider the human rights of women in this ruling and that the government will look towards the Nordic model as an option. France recently approved a bill that would make it illegal to pay for sex, after considering the success of this law in Sweden and other progressive countries. A similar model could easily be adopted in Canada.

Canada has an opportunity to take a position on women’s rights and make marginalized women a priority with this ruling. We hope they do the right thing. 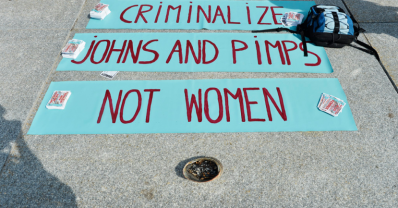