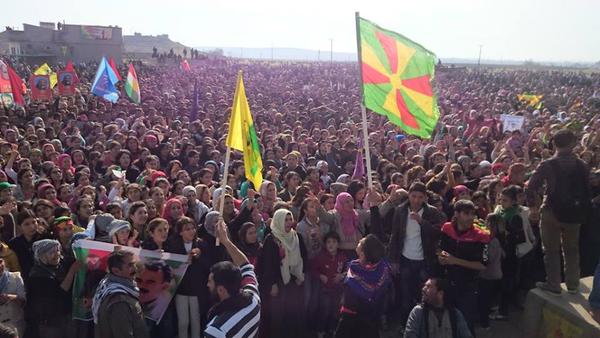 WLUML is pleased to announce it has joined forces with the Women's Alliance for Kurdistan, Iraq and Syria, and will march with the Alliance on the 7th March to call for the liberation of all women under “IS” control on the occasion of International Women’s Day. We invite you to march with us and join the call to end violence against women.

In August 2014, the world watched aghast as the force known as “ISIS”, or the “Islamic State” (IS) swept across Syria and Iraq.  Their campaign forced nearly 100,000 Yazidi (Êzidî) people from their homeland.  Many men were shot en masse, while women were treated as war bounty – sold at markets as slaves for the so-called Jihadists

However, women have mounted their own resistance.  Women played an integral role in the victory at Kobanê, where Kurdish forces defeated IS.  The Kurdish Women’s Movement, guided by principles of self-governance and self-reliance, has seen their ideals begin to be realised with the success of the revolution in Rojava.

Kurds gather at Kobane border to celebrate victory against IS.  Via @rConflictNews

However, IS continues its murderous campaign and still poses a threat to women of all creeds in the Kurdish regions and beyond.  IS are still controlling women’s bodies by enforcing dress codes and rules on women travelling outside unattended. Of the estimated 5,000 Yazidi women and children kidnapped by IS, the majority remain captive enduring rape, forced marriage, and violent abuse. The Yazidi MP Vian Dakhil who has battled to save her people from IS, is now at the top of the extremists’ hit-list.

In late 2014, Kurdish women’s group Roj Women called a meeting of London-based women’s activists to respond to the situation.  From this meeting, a nascent coalition was announced – the Women’s Alliance for Kurdistan, Iraq and Syria.  The Women’s Alliance was formed to condemn and raise awareness of the extreme violence being experienced by women in areas affected by IS, and to express solidarity with these women.  In November, the Women’s Alliance held its first public meeting at the School of Oriental and African Studies, University of London.

Women Living Under Muslim Laws (WLUML) is pleased to have signed on as a member of the Women’s Alliance.  As a network committed to speaking out about violence perpetrated in the name of religion and culture, and to supporting local struggles for autonomy and equality, this initiative is very close to our hearts.  Our first activity will be to join the Alliance in celebrating International Women’s Day.  We will march through London as part of the Million Women Rise march to condemn violence against women, and a member of the Alliance will speak at the rally at the end of the march.

As we march in London, our Kurdish sisters in Turkey will also be marching, setting off from Nusaybin on the 6th March and rallying at in Diyarbakir on 8th March. This march, organised by The Free Women’s Congress (KJA) and dubbed ‘The World March of Women’ will salute the resistance of Kobanê this year and will gather to act in solidarity with the women’s revolution in Kurdistan.

Members of the Women’s Alliance: